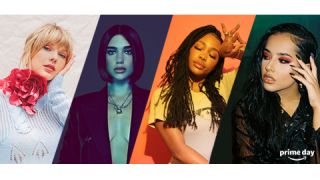 When Amazon confirmed its Prime Day dates earlier this week, it promised greater inclusion of its Prime music and video services in the annual shopping event. True to its word, the online retail Goliath has announced a "can’t-miss" Prime Day concert that will stream live on Prime Video and naturally be available on-demand afterwards.

A Prime Day Party, no less, has also been announced. Taking place on 10th July in London, the Amazon Music-presented event will be headlined by Rita Ora.

Amazon has also today announced a new Prime Music deals. Prime members who haven’t yet tried Amazon Music Unlimited (Amazon's £10/month Spotify rival, which sits outside of the Prime offering) can get four months of the premium streaming tier for just $0.99/99p. The offer is valid until 16th July.

You don't have to wait until Prime Day to bag a bargain, either. There are plenty of pre-Prime Day deals live in the UK now, including 54% off the five-star Sennheiser Momentum 2.0 Wireless headphone, a half price LG 43 43in 4K HDR TV and £100 off an Award-winning budget Yamaha soundbar.