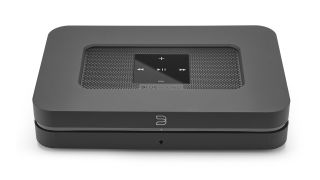 While Sonos dominates the world of multi-room at the affordable end of the market, Bluesound has done a fine job of positioning itself as a talented high-end alternative.

Its most recent Generation 2i line-up has a couple of standout performers in its ranks including the excellent Bluesound Node 2i streamer and Powernode 2i streaming system.

The range features all manner of streaming smarts and that Bluesound bow is just about to get another string.

On Tuesday 11th December Apple AirPlay 2 will arrive as part of a new update to the company's BluOS streaming platform. In theory, this should now mean simplified streaming from Apple devices through Bluesound products over your home network.

You'll be able to sync playback through the home or push different music through to different components. You'll also be able to control playback on Generation 2i products using Siri, Apple's voice control assistant.

Owners of first generation Bluesound products will also be able to use AirPlay 2 by grouping their older units with the newer models using the company's BluOS app.

There's no need to go hunting for the update - just fire up your Bluesound kit on the 11th and you should be greeted with a prompt to download the new software.