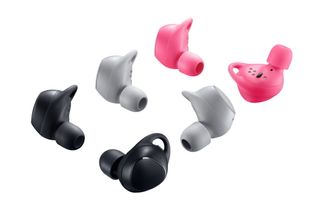 With truly wireless buds (earphones without any cables) building up just as much of a head of steam as smart speakers in the last year, Samsung is already on round two of its Gear IconX (which can be pre-ordered from today).

The new version supports Samsung’s personal voice assistant Bixby, meaning users can control music or phone by tapping and holding the earbud and saying a command.

An improved battery also offers a claimed five hours (up from 3.5 hours) of music streaming through the buds’ built-in music player (which has 4GB of storage), or seven hours of standalone music playback – more than is offered by the rival Onkyo W800BT or Google Pixel Buds, albeit not as generous as the nine hours delivered by our favourite truly wireless pair, Sony's WF-1000X.

The updated design comes in black, grey or pink - and, according to Samsung, is even more ergonomic and lightweight. Great news for fitness fanatics.

Speaking of which, the new Gear IconX automatically tracks your running routines, and features a Running Coach function which can be activated to provide real-time exercise status updates.

The new Gear IconX buds, priced £199/$199, are available to pre-order now from Samsung.com and will be on sale on 27th October. The UK launch expected to follow shortly after.