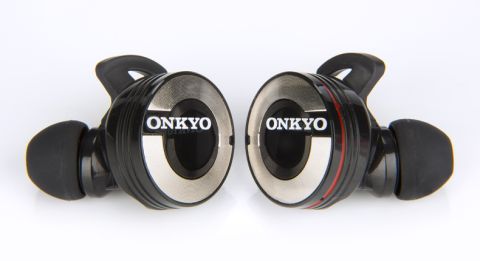 Hopes are routinely shattered upon the rocks of reality, as they were with our first experience of a pair of truly wireless in-ear headphones, the Motorola Verve Ones+.

Those sporty in-ears suffered from a number of fatal issues, but now the Onkyo W800BTs have the chance to reaffirm our faith in the concept.

Traditional wireless in-ear headphones aren’t actually wireless. They are in the sense you can stream audio to them over Bluetooth, but there’s always an umbilical cord connecting the two, usually with in-line controls and a mic for taking hands-free calls.

Proper wireless in-ears like the W800BTs cut the cord altogether, so all the tech is placed inside the earpieces. This obviously has an impact on how small they can be.

The W800BTs aren’t especially discrete and the silver Onkyo logo and accents that run around the edge of each plastic earpiece are a little shouty.

Comfort is key when you’re auditioning a potential new pair of in-ears, and there’s good news (and some bad) where the Onkyo W800BTs are concerned.

Getting a good seal takes some careful manoeuvring and they don’t slot as effortlessly into place as the Motorola Verve Ones+. Three different sizes of silicone ear tip are provided, but that’s the bare minimum at this level.

Each earpiece features a ‘stabiliser’ arm that protrudes from the top. Its job is to help secure the headphones in your ear. And, once in place, the Onkyos don’t feel like they’re going to pop out.

We put them to the test with a quick gym session and they pass with flying colours.

However, opinions on comfort varied amongst our review team – some were happy to listen for prolonged periods, while others had to remove them because they were causing discomfort.

With no cable to tie the headphones together, and no in-line controls and mic, has Onkyo been able to squeeze all that functionality into its new headphones?

The answer is, well, sort of. There’s a microphone built into the underside of the right earpiece. You can answer calls, but you can’t control any element of music playback, including skipping tracks or pausing music – you have to take your smartphone out of your pocket and do that manually.

Like most headphones, the W800BTs come with their own case. But this is a clever case. Not only does it provide a secure home for the headphones, it also doubles as a charging station. With the Onkyos having just a three-hour battery life, this should come in handy.

The case features a built-in battery with enough reserves to charge the headphones five times – indicated by a row of five LED lights on the front of the case. When the headphones aren’t in use it’s good to get in the habit of putting them back in their case, just to keep their batteries topped up.

Pressing and holding the sides of both earpieces powers them up and kicks off the pairing process. Select Onkyo W800BT on your smartphone’s Bluetooth menu, wait for the beep and you’re good to go.

Though there are no controls for music playback, you can press the side of the right earpiece to take and end calls using the built-in mic (which also pauses your music), but that’s as far as it goes. We can’t help but think it’s a missed opportunity.

Taking your phone out of your pocket so often defeats the object somewhat. The W800BTs may free you from cables, but they shackle you to your smartphone.

Using the built-in mic is simple enough, but the call quality isn’t great. We noted higher than normal levels of outside noise compared to other headphone and mic combinations. In a noisy environment, you could be difficult to hear.

The W800BTs might be the same price as the Motorola Verve Ones+, but this is where the similarities end. The Onkyos favour a clear and open sound, allowing music to breathe and more detail to filter through. It’s a clean soundstage that sounds uncluttered.

The headphones are easy-going and happy playing a wide variety of musical genres. Play The Chemical Brothers’ Go and the tune flows along nicely, but it isn’t the most punchy or dramatic presentation we’ve heard.

The Onkyos paint a leaner picture than the best in-ears, only scraping the surface of bass notes that you know should sound fuller. But there’s a decent level of musicality – high notes and vocals sound sweet but not too sickly.

Play Banks’ Waiting Game and as the vocal arrives centre stage, there’s no brightness or harshness to speak of. This is a big positive and makes the Onkyos easy to listen to in both short bursts or over longer listening sessions.

Compared to the very best in-ears, though, they could sound a bit more explicit and less rolled-off at the very top end.

They also don’t communicate and differentiate the different piano strokes and dynamic subtleties in the track as well as the best budget in-ears, such as the Sennheiser Momentum M2s, which deliver greater dynamics and weight.

The Onkyo W800BTs are in a unique position, with only a handful of rivals that offer the same level of convenience. Contrast this with the Bluetooth headphone market where there are many models all offering the same thing.

But are they worth £230? We’d have to say not quite. The W800BTs’ inability to control music playback seems like an oversight for headphones that should offer more freedom.

Sound quality is good for a product of this type, but not perfect by any means.

But, following on from the disappointing Motorola Verve Ones+, the W800s give us hope for the future of the category. Headphones like these certainly make sense and can only get better as the design and technology evolves. We're interested to see how Apple's new AirPods fare, that's for sure.

It’s an exciting proposition, but right now, the Onkyo’s require a few more refinements to be considered a no-brainer.