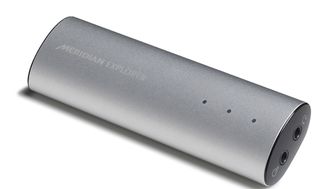 The Meridian Explorer is a pocket-sized USB DAC designed to improve the sound of the music from your Mac, Windows or Linux computer.

Given the popularity of similar devices such as the Award-winning Audioquest DragonFly, it's no surprise that Meridian wants a slice of this expanding market.

The Explorer replaces a computer's soundcard with a USB-powered DAC featuring Meridian's 'resolution enhancement technologies', which it claims will reproduce everything from MP3 to high-resolution audio files at their best.

It's a USB audio Class 2 digital-to-analogue converter with a six-layer PC board, all-metal enclosure and high-quality filter capacitors. Each unit is assembled at Meridian's Cambridge factory.

Key technical highlights are as follows:

The really good news is that we've already got our hands on a test sample, so look out for a full review on whathifi.com later this week.

And in the April issue of the magazine (on sale March 8th), the Meridian Explorer will be up against its rivals in our USB DACs Supertest.