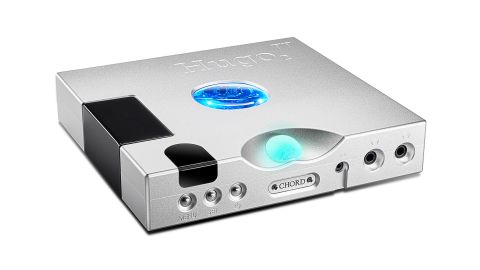 The Hugo TT2 is a brilliant DAC. Chord has produced yet another class leader

Chord Electronics’ domination of the premium digital-to-analogue converter market has been spectacular. Over the past few years the company has released a variety of number crunchers from the £399 portable Mojo to the high end all-singing DAVE at £8499 and swept aside all-comers, winning a truckload of five-star ratings and Awards in the process.

Despite the brilliance of the range, we’ve long felt that the original Hugo TT was last among equals. It was essentially the original Hugo circuit built into a larger, more domestically appropriate case and fed by a superior power supply. That upgraded power supply gave the original TT a notable performance advantage over the basic Hugo, but as it cost more than twice as much we didn’t feel it was as big a bargain.

While the likes of the Mojo, Qutest, Hugo and DAVE should be rightly considered all-conquering superstars at each of their respective price points, we felt the original TT was, relatively speaking, merely very good.

The Chord Hugo TT2 seeks to put that right and move the TT out of the long shadows cast by the rest of its ridiculously talented family. We think Chord has succeeded in this respect and then some.

Physically, the Chord Hugo TT2 sticks firmly to the squarish template set by its predecessor. The Mojo’s stylistic influence is felt as strongly here as it was with the recently upgraded standard Hugo 2 design, with a refinement of the scoops, lit porthole windows and cosmetic flourishes the company has become known for. Build quality is excellent, with the unit feeling suitably solid and luxuriously finished – this certainly feels like a premium item.

The heart of this and every other current Chord digital product is the use of a powerful FPGA (Field Programmable Gate Array) running in-house software, which performs all the decoding, filtering and other processing tasks. This gives the company a massive advantage in performance over rivals that use standard off-the-shelf DAC solutions.

The TT2’s processing power is twice that of the standard Hugo 2 – thanks to the use of a more advanced FPGA – and it has a far more generous power supply arrangement to boost performance further.

In Chord’s range only the flagship DAVE has more number crunching ability and even that doesn’t come close to matching this TT2’s amplification section when it comes to sheer oomph. The peak current is claimed to be a robust 5A, which is enough to drive the most difficult of headphones. Such is the unit’s current capability, that when the TT2 was introduced Chord claimed that it could even drive efficient speakers directly.

Impressive, but it’s not all sweetness. We’re certainly not convinced by the unit’s revised ergonomics. Chord has chosen to control the TT2 with a scrolling menu system. That sounds fine on paper, but it's a pain when you want to change the input and have to scroll past numerous other parameters before you can get to the selection option.

You then have to press another button to scroll through the unit’s extensive range of inputs, which can get frustrating over time. The best way around it is to use the supplied remote handset, which makes things much more direct and easier.

Look through the set-up menus – the TT2’s display is small – and you’ll find a variety of adjustments. There are four levels of the company’s Crossfeed system, which aims to move the sonic presentation of headphones away from being between the ears to something closer to that produced by stereo speakers. Unlike many such processing modes, this one really works and we leave it on the second highest setting.

There are also four filter options, which alter the presentation slightly and give a stepped choice between pure neutrality and a slightly warmer presentation with a degree of high frequency rounding. We leave this on Filter, the neutral option.

Beyond these settings you can adjust the brightness of the display as well as swap the unit’s gain between low and high options (which helps equipment matching) when the TT2 is used with headphones or a partnering amplifier.

Products such as this Chord have become increasingly flexible over the years. The TT2 is many things. It’s a high quality DAC, it’s a headphone amplifier and can even drive a power amplifier or active speakers directly. At the press of a button, or in this case, many presses of buttons, you can even get it to have a fixed output so that it can be plugged straight into your existing amplifier and work like a conventional hi-fi DAC.

Connectivity is good. As far as inputs go there’s USB, a pair of opticals and two coaxials (using BNC connectors). Use Chord’s Blu MkII CD transport with its built-in up-scaling and this pair of BNC inputs can be used together to accept a signal up to 24-bit/768kHz.

AptX Bluetooth is also in the menu and the Chord connects to our iPhone 6S Plus quickly and without issue. There are three headphone outputs on the front panel and the unit has no problem driving multiple ‘phones at concurrently either. You can add single-ended RCA and balanced XLRs to the list of outputs too.

The Hugo TT2 has a further pair of outs marked DX. These are intended for use with as yet unreleased Chord products, but the company has been pretty tight-lipped about this so far.

While Bluetooth, even in aptX form, isn’t the best sounding of connections we’re glad Chord’s designers specified it. It opens the Hugo TT2, and by extension your hi-fi, to a wealth of streaming services and music in general (yes, even from YouTube) that most traditional system miss out on.

The sound from our iPhone via Bluetooth is good through the Chord. It’s nice and clear, showing a degree of insight and resolution that would surprise many. It doesn’t come close to the quality delivered through any of the Chord’s physical connections, but sometimes the convenience takes priority, doesn’t it?

We connect our Apple MacBook, loaded with a hard drive full of CD and hi-res music files, to the Chord’s USB input and it becomes apparent just how capable the TT2 is. While it shares the Hugo branding, this new one really is in another league to the standard unit, and delivers a performance far closer to the high-end DAVE than its namesake. That’s saying something when you consider the massive price difference between the two.

With a demanding piece of music like Orff’s Carmina Burana, the Hugo TT2 paints a vivid picture brimming with attack and a sense of coherence few can match, let alone better. It’s a wonderfully detailed and expressive presentation, displaying the music’s seismic dynamic shifts with fluidity.

Compared to the original version, the Mk2 is undeniably clearer and more insightful. It sounds more focused and precise, without being overly analytical.

Tonally the Chord is even-handed, though sits on the lean side of neutral. That doesn’t stop it from doing a superb job in rendering instrumental textures though – the orchestra comes through in a convincingly full-bodied manner.

Stereo imaging is excellent. This DAC paints an impressively layered and expansive soundstage that locks instruments in place regardless of how complex the music gets. With pieces of music such as this, we find Chord’s Crossfeed system has the most benefit, delivering a more convincing, speaker-like stereo image with headphones.

We use a number of headphones including our reference Beyerdynamic T1s, our long serving Grado RS-1s and Shure’s SE425s in-ears, and the Hugo drives them all without issue.

We move to Neneh Cherry’s Broken Politics and fall in love with the way the Chord handles the album’s understated polyrhythms. Everything sounds so secure and surefooted. There’s a level of rhythmic confidence here that only the likes of the DAVE can better in our experience. The result is that the TT2 portrays the momentum of the music beautifully, conveying the mood and emotion of each track in an utterly convincing manner.

Next we connect the Hugo TT2 into our main reference system to see how it performs as a digital hub in tradition set-up. Our source is Naim’s NDS/555PS music streamer and the Chord feeds our usual Gamut D200i power amp/ATC SCM50 speakers combination as well as a pair of active Manger C1s speakers. It works flawlessly. It has plenty of poke, sounding robust and capable of a sledgehammer punch when the music demands. Importantly, this Chord is equally adept when it comes to qualities such as finesse and transparency. In both respects it’s class leading.

We run through a range of tunes from an audiophile favourite such as Take Five from the Dave Brubeck Quartet and Bruce Springsteen’s High Hopes set all the way to Tchaikovsky’s Romeo & Juliet, and the Hugo takes it all in stride, never favouring any musical genre above another.

In performance and feature terms it’s possible to make a strong case for the Hugo TT2 to be considered the best value DAC the company makes. You’ve got to have a mighty transparent system (and fat wallet) to justify the use of the DAVE over this.

There’s now also plenty of clear air between the performance of the TT2 and the standard Hugo 2, enough to make the price difference easily justifiable in a suitably talented set-up.

So, Chord’s seemly unstoppable digital bandwagon rolls on with yet another class leader. The Hugo TT2 may have slightly flawed ergonomics, but in every other respect it’s a stunner.

See all our Chord reviews