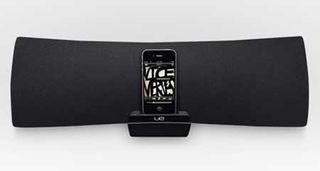 Logitech has adopted the 'Ultimate Ears' tag used on its headphones for its new AirPlay speaker system, the £300 UE Air Speaker dock.

It's fitted with Apple AirPlay, so will connect to a Mac/PC (iTunes 10.1 or later) or any iOS device (iOS 4.2 or later) over a wi-fi network, enabling you to stream music from your computer, iPhone, iPad or iPod Touch.

Set-up is simply a case of docking your mobile device, following the on-screen instructions to download the free app, and then entering your wi-fi network password.

The built-in dock will charge your iPad/iPhone/iPod, and Logitech says the UE Air "offers superior functionality in a stylish design... delivering a big soundstage with detailed stereo sound".

You'll be able to buy the UE Air Speaker dock from April on the Logitech website.