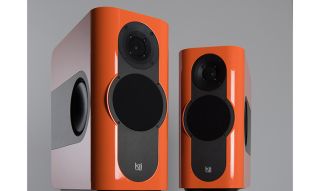 German start-up Kii Audio has set out to “break the sonic mould” with its new Three speakers, promising big sound from compact cabinets - something it feels is currently missing in the market.

In order to achieve that, Three has six drivers firing out from the front, side and rear of its 20cm wide, 40cm tall cabinets.

The front-firing 2.5cm wave-guided tweeter and 13cm midrange driver makes it look like any ordinary speaker, which is more than can be said for its two side-firing and two rear-firing 16.5cm woofers.

Kii’s proprietary Active Wave Focusing filters have been designed to create a time-aligned wave front that's only directed forward and behaves as though it came from the midrange driver.­

There’s a 250-watt Ncore power amplifier behind each driver, arranged on two three-channel boards stuck internally to the side panels. For this implementation, Ncore class D technology has been specially utilised to reduce the distortion performance of each drive unit.

There is an XLR input, and twin Kiilink RJ45 input/outputs for connecting other Kii products.

A sixteen-position switch (free, wall and corner) allows for some room correction, while a ‘countour’ control offers fourteen EQ presets.

The Kii Control (which connects, and is powered, by a CAT cable) acts as a pre-amp, providing a touch-control interface for its preset options as well as power, volume change and input selection – all of which is guided by its OLED display.

It also has the facility for a further three digital inputs: coaxial, optical and USB – the latter of which supports PCM files up to 24bit/384kHz and DSD128.

Alternatively, the main Kii Three system functions can be remote controlled via an IR remote.

The Kii Three is available this month in two standard finishes: high gloss white and graphite satin metallic. However, “any” custom colour in a choice of high gloss, matt or metallic finishes is also available for a premium. We rather like the orange, if we say so ourselves.

The Three’s brushed aluminium driver panels have an anodised black finish to match the stands, which are 70cm tall, made from black powder-coated high quality steel, and priced at £995 per pair.

The Kii Control can also be purchased separately for £1,495.

Magico conjures up its most affordable speakers yet