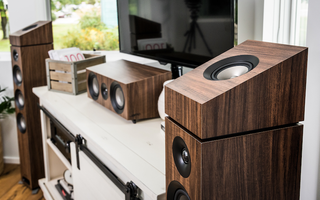 The Studio 8 range employs soft dome tweeters with WaveGuide technology, as well as aluminium/polyfibre woofers plus reflex ports. And all models are available in your choice of white (with grey grilles), black or walnut (with darker grey grilles) matte vinyl finishes with wood-grain accents.

Some models also benefit from what appear to be carefully considered Atmos speaker integration features too.

The S 809, S 807 and S 803 models feature patent-pending metal connectors on the top of their cabinets to act as terminals for the Atmos speakers. The Atmos speakers also have metal feet to align with these connectors, resulting in a clean look that doesn’t require extra cabling.

Also in the name of seamless design, the grilles on the S 809 and S 807 floorstanders can slide up to align with the front of the S 8 ATM - so all inputs and wires are hidden.

The Jamo S 805 speakers (£349 per pair) will be on demonstration for the first time at the Bristol Show, while other Studio 8 models will be on display.

The speakers, most of which are available now, are also available as complete home cinema packages (see below). For example, a Dolby Atmos 5.1.2 system comprising the Jamo S 805 HCS with Dolby Atmos toppers and an S 808 SUB can be purchased for £1,019.

Home Cinema Systems (HCS) below include the listed speakers, plus a pair of S 801 standmounters and S 81 centre speaker.