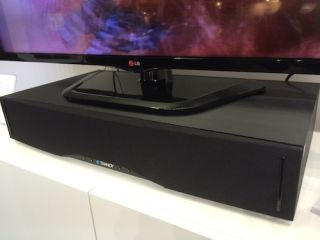 Tannoy has taken the wraps off its first ever soundbase, the BaseStation One.

Spotted at the Integrated Systems Europe show (ISE) in Amsterdam, the BaseStation One costs £350 and launches in May this year.

You can connect a TV through the BaseStation's optical digital or analogue input, but the feature count doesn't stop there. There's also aptX Bluetooth for playing music from a compatible smartphone or tablet - you can even pair your device using the Tannoy's built-in NFC connectivity. Last, but by no means least, there's a subwoofer output for the potential of extra oomph..

And, talking of subwoofers, we've also been told there's a matching sub in the works for the BaseStation One. Bought together, the package should cost around £500.