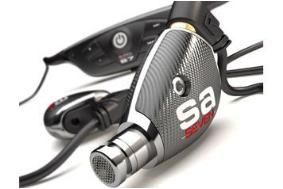 The American manufacturer - who both designs and bullds its buds in the US - has turned to miltary contractors for the technology behind this wireless-capable model.

From drones to 'phones

So the SA7's carbon-fibre sidings are from a company that more normally shapes the material for drone aircraft. In headphone terms, that means a lightweight but tough casing for the electronics, which are in a dual-armature driver configuration.

The drivers are wrapped in silcone under that carbon-fibre shell, which in turn is secured via titanium fixings.

To tailor the sound to suit your ears (and music), Sleek's VQ Tuning system allows for a range of audio tweaks.

The SA7s are also claimed to block out 'more the double the ambient noise' of noise-cancelling headphones, thanks to their Environmental Sound Control feature.

The SA7s can be used in either wired or wireless mode - with the latter being powered by the Kleer Audio lossless transmission technology that's impressed us in a range of recent products.

We look forward to testing the Sleek Audio SA7s as soon as possible.