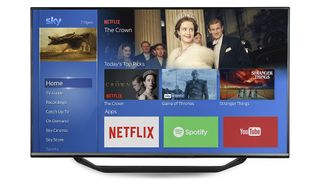 Sky Ultimate TV with Sky Q is the best entertainment offering around right now, but it's not cheap. Thankfully there are ways to make it more affordable, such as the current Sky Q deals which see a few pennies knocked off Sky TV packages. There are also other time-limited deals or you can just prune away the channels and services you don't need.

Sky combines top-flight sports, the best drama and comedy from the UK and US, and the biggest films before they reach other services, and much of it in 4K too. And now it offers Netflix, giving you a host of original content and an exhaustive library to binge your way through.

Here we'll cover both of these options, as well as tell you all about Sky Q, how to get it and what it offers. So, here are the best Sky TV deals, bundles and packages and how to get them. Happy viewing!

What is Sky Q?

Sky Q is the next generation of home entertainment, following on from Sky+. It offers lots of channels covering drama, comedy, wildlife, kids, films and sports content, served up in a package that delivers 4K picture quality, the ability to pause and rewind live channels, and full multi-room features.

How do you get Sky Q?

To get Sky Q, you'll need a Sky Q Box, which, until recently, came in two sizes: 1TB or 2TB (which was known as Sky Q Silver when it launched). The 1TB option stores up to 500 hours of standard definition TV, lets you record six channels while watching a seventh and is able to show HD and 4K content.

The 2TB box holds twice but, for the time being, has disappeared from the Sky website.

You'll also need a satellite dish in order to watch Sky, though we're promised that Sky will soon be available over broadband.

Can you still get Sky+?

No. While Sky still supports its Sky+ customers, the only option for new customers is Sky Q.

How much do the Sky Q boxes cost?

The Standard Sky Q package allows you to watch content at up to HD resolution and comes with the 1TB box. There's a one-off installation fee of £20 and then it's £25 per month for the basic TV package which includes Netflix, Sky Atlantic, Sky Originals, 300 channels, 500 Sky box sets and 40 catch-up services.

You can bump it up to the over 35 HD channels for an extra £6 per month with the Sky HD package. That takes the total monthly to £31, and that seems like something of a no-brainer.

For only an extra £4 per month, though, you can get Sky HD + UHD, unlocking all the 4K content. So, that's £35 per month total for the Sky Sport and Sky Cinema 4K channels as well as an upgrade to Netflix Premium.

Finally, you can also add on Sky Q Multiscreen for an additional £14 per month (£39 total, without HD) And enjoy your Sky content on a second TV thanks to the additional Sky Q mini box. The set-up fee goes up to £40 from £20.

With any of these Sky Q options, you can add on TV channels in bundles like Sky Sports, Sky Box Sets, Sky Entertainment, etc.

That's the basics covered. So what do the various Sky packages offer?

For new customers, Sky Ultimate TV costs £25 a month for the first 18 months. Now you've got your starter pack, it's time to add some extras.

This gives you more sports channels than the standard Sky TV package. Namely, you get individual channels dedicated to Premier League football, the football league, cricket, F1 and golf.

This usually costs £30 a month, but is currently down to £23 a month for new Sky customers (for the first 18 months).

If you have the relevant package, you'll be able to watch some of these channels in 4K.

Sky Cinema | £11 a month
With a new film premiere every day and over 1000 other films to choose from, Sky Cinema is great for film fans. The selection is up-to-date and you also get these channels in HD at no additional cost.
View Deal

Sky offers 11 film channels, along with over 1,000 movies on-demand. It also shows a new premiere every day of the year.

Sky Kids | £5 a month
This deals gives over 5000 episodes on demand. There's more though as there are also 11 live channels. You can also have up to 10 individual profiles on the Sky Kids app with shows tailored to the age of your children.
View Deal

There are 11 kids channels up for grabs, including the Disney Channel, Disney Junior, Nickelodeon, Nick Toons, Boomerang and Cartoon Network.

This costs £5 extra a month. It only offers a 31-day contract, so you won't be tied in for the long run.

4K content on Sky Ultra HD + HD |£10 per month
Sky Cinema and Sky Sport in 4K where available plus the 35 HD channels too is what you get with this very worthwhile add-on. It also offers access to the 4K programming on Netflix with Netflix Premium.View Deal

The Ultra HD + HD add-on is your ticket to 4K content on Sky. It unlocks access to 4K films and 4K sport on the Sky Cinema and the Sky Sport channels respectively. Do bear in mind, though, that not all films and sports are available in UHD.

The other bonus of this relatively cheap addition is that it upgrades your Netflix access to Netflix Premium which brings 4K programming through Netflix - and there's plenty of that - as well as simultaneous Netflix viewing on up to four devices.

While Ultra HD + HD is normally £10 per month, it's only £6 per month if you're also on the Multiroom plan.

BT Sport 1, 2, 3 & ESPN for Sky customers | £25 per month
Four BT Sport channels under one subscription and Sky customers can have their pick of pretty much all the televised sport on the UK. The one-month rolling contract means that you can cancel at any time.View Deal

Just because you're with Sky, that doesn't mean you can't access other sports channels too. The four BT Sport channels are available to Sky customers on a one-month rolling contract.

Through those you can watch Premier League football, UEFA Champions League, Bundesliga, UFC and more. At present, you can only get them in HD at best, though.

Sky Broadband Superfast| 18 months | £20 one-off set-up fee | from £27 per month
This tariff includes Sky's unlimited fibre broadband with Speed Guarantee as standard. You get Sky Pay As You Talk phone access and an average of 59 Mbps download speeds.View Deal

Sky Broadband Superfast & TV deals| 18 months | £59 one-off set-up fee | £52 per month
If you're also looking for a fibre broadband and Sky TV deal bundle then you can sign up for as £52 a month all in. All of Sky's broadband packages include unlimited downloads, line rental, free evening and weekend calls and the Sky Hub router.View Deal

Sky Broadband Superfast, with its 59Mbps average download speeds, is available separate from the TV package or bundled in with a Sky Q box and lots of channels.

Total set-up costs are not cheap but includes the Sky TV box and Sky Hub router as well. Line rental is included in the monthly price.

Enter your postcode during the buying process to see what deals are available for you.