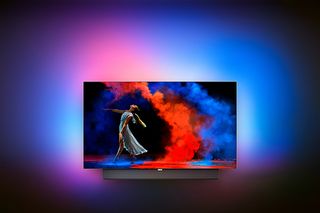 ...especially as it ended 2017 on something of a TV high. And now we have firm details of what Philips has in store this year - or, at least, for the first half of it.

The company has picked a side in the dynamic metadata HDR bun-fight - and it's going with Samsung's open-source HDR10+ instead of Dolby Vision. It's deploying its extremely well regarded P5 picture processing engine in its flagship range of 4K LCD TVs, and these screens get Philips' NanoLED technology too.

The entire Philips 2018 range (for the UK, at least) features three-sided Ambilight, and the more expensive models feature quad-core Android power and are Google Assistant-ready.

Any TV brand's 2018 headline news, of course, involves OLED. Philips knocked it out of the park towards the end of last year with the outstanding 55POS9002, so it's no surprise to learn that screen continues well into 2018. But it's good to hear it's being joined by four more OLED models.

There's a 65in version of the 55POS9002, called OLED 873 (pictured above). At first glance, it seems somewhat remiss of Philips not to simply go with '65POS9002' and enjoy a bit of the 55in model's hard-won glory - but the company seems anxious to get away from the 'POS' model nomenclature. Answers on a postcard as to why that might be.

Above that sits the 65in OLED 973 (pictured top). This is, in video terms at least, identical to the 65in OLED 873 - but it features a 6.1-channel, 60-watt speaker system integrated into its stand. Six forward-firing are augmented by a rear-firing triple-ring speaker with integrated bass port.

And there are a couple of entry-level OLEDs too - 55in and 65in versions of the OLED 803. Philips is making much of the minimal design, super-narrow bezel and brushed metallic finish of these two screens.

Philips is bringing two new LCD/LED ranges to the UK this year: the 6000 series and the 8000 series. The 7000 series announced in Amsterdam in January is not coming to the UK.

The 6503 is a 4K HDR range and will be available in four screen sizes. This series marks the debut of Philips' 'Saphi' smart TV platform and the company's upgraded Sound Processing system.

The 8303 models, similarly, can be had in four screen sizes. They're equipped with HDR10+ and the celebrated P5 picture processor. The NanoLED technology (which uses a layer of 1nm particles to absorb unwanted lightwaves in a drive for greater colour purity, especially for off-axis viewers) is the same as LG's own NanoCell technology, and Philips is using LG's panels for these TVs.

The biggest (75in) 8303 model (pictured above) features something called Minimalist European design - the three smaller screens must make do with Premium European design - and that look is carried over to the three 8503 models that top out the LED range. These TVs are also sporting a visible sound system, which will - hopefully - negate the need for a soundbar or similar.