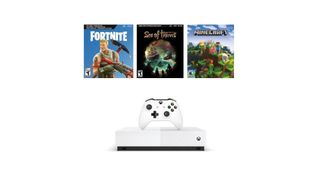 Looking to score a deal on a cheap Xbox? In honour of Black Friday, Walmart has slashed the price of the Xbox One S 1TB All Digital Edition three-game bundle from $249.99 to just $149.99.

Microsoft Xbox One S 1TB All Digital Edition Bundle (White) $149.99 at Walmart
This is one of the best Black Friday gaming deals we've spotted: an Xbox One S console with 1TB of storage plus a bundle of three games (two of which are smash hits), all for under $150. View Deal

Confusingly, the Walmart website also mentions racing game Forza 3, but that appears to be an admin error. We'd recommend confirming with Walmart before finalizing your purchase, though.

As well as the download codes for the games, you get the 1TB Xbox One S All-Digital Edition console and a wireless controller, plus a one month Xbox Live Gold subscription.

The One S might not the the top-of-the-range Xbox – that honour currently goes to the much pricier One X – but Walmart's $150 bundle has to be one of the best-value Xbox deals we've seen. Well worth getting your hands (or indeed thumbs) on.

More of a PlayStation fan? Then you should definitely check out these Black Friday PS4 deals and PS4 Pro deals.