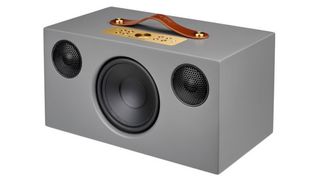 Six has become four in terms of wireless speaker champions at this year’s What Hi-Fi? Awards, but it is a sign more of the supremacy of our winners than any drought of competition in the market.

So fewer products overall compared to last year, but greater domination of this market by Audio Pro whose own trophy haul has risen from two to three.

Since Audio Pro's Addon C5 speaker was named 2017 Product of the Year, we’ve been privileged to spend time with the Addon C3 and Addon C10 – products that sandwich the former in the range – and both usurp their sibling to take home Awards this time round.

Essentially the three-time Award-winning Addon T3 with wi-fi on board, the Addon C3 introduces Audio Pro’s outstanding baby speaker to its multi-room family – another category in which the Scandinavian company takes an Award.

The Addon C10, meanwhile, not only steps up the power but betters the performance of Audio Pro’s other boom-box-style wireless speakers across the board, setting rivals an intimidatingly high bar that only a product costing more than twice the price can leap.

And yes, you’ve guessed it, that product is another from Audio Pro – the superbly named Drumfire (pictured above), which has knocked Naim's prestigious, multi-Award-winning Mu-so off top spot.

A wireless speaker and subwoofer combo resembling something more like a guitar amplifier than any hi-fi product, its loud, spacious presentation proves it to be far more than an expensive gimmick.

But if it’s a throw-it-in-your-bag, take-it-anywhere wireless speaker you covet, there’s still nothing better to have crossed our collective path than the Ultimate Ears Roll 2 for less than £100. Ultimate Ears has been taking home Awards in this category since 2015 for the Roll 2 and its predecessor, and it’s difficult to imagine a more fun, portable speaker becoming available at this price in the near future.

With last year’s Product of the Year losing out in 2018 to two of its stable mates, it leaves that sought-after title open for any of this year’s winning quartet.

We’ll announce who takes the crown at our Awards ceremony on Wednesday 7 November, as well as on the website and social channels.