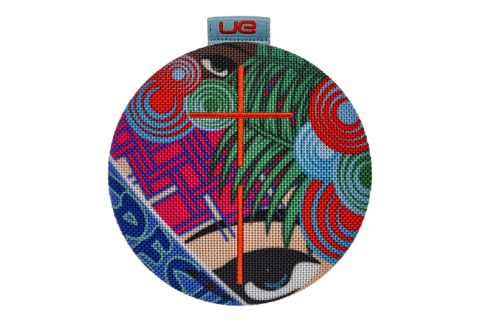 Improved sound and a price cut make this ultra-portable, colourful speaker even more desirable than before

Ultimate Ears’ colourful, outdoors-y Bluetooth speakers have been a hit, from the cylindrical Boom and Megaboom to the disc-shaped Roll. They look fun, they sound great, and they’re excellent value for money.

The UE Roll 2 is another notch in the American company’s bungee cord belt. It’s the second iteration of the Award-winning Roll, but at first glance you’d be left wondering what has changed to warrant a brand new model.

On the outside, the Roll 2 looks the same: it’s a tiny flying saucer of a speaker, with large volume icons, and an ultra-portable and funky design.

So what’s new? It’s 15 per cent louder, has a greater Bluetooth range of around 100ft (depending on the environment, of course), and it’s cheaper. The new UE speaker costs £80, down from £100 for the original.

Does that mean you’re getting more for your money? Absolutely.

That it goes louder than the previous model is obvious from the moment we do a side-by-side comparison. But it doesn’t just go louder; the Roll 2 is also more open, more dynamic, sounds more solid and more detailed. In fact, if there’s a theme to the Roll 2, it’s ‘more’.

But it doesn’t get carried away. Most Bluetooth speakers of this compact size and sub-£100 price tend to overemphasise the bass to compensate for its physical limitations. Ultimate Ears resists this temptation.

It has the same sense of fun as the previous model, but there’s a touch of maturity with the new Roll 2. The thin, forward-bearing treble that could rear its head has been calmed down to even out the balance.

The low end is more solid, and voices are allowed to breathe and flourish.

Play Lenny Kravitz’s Frankenstein, and the drums hit with a heft that wasn’t there before. There’s a solid thwack, with a good deal of attack driving the funky tune.

It’s surprisingly well organised for a speaker of its compact size and price. Each instrument sounds distinct and is given its due: the guitar twangs and whines, the saxophone fluidly meanders through the song but doesn’t sound too sharp when it hits the high notes, and the bassline is satisfyingly solid without sounding tubby.

What’s impressive is just how controlled the snappy rhythm is. It’s fast, it’s punctual and yet it never sounds like it’s trying too hard to be precise. Stream You Ain’t the First by Guns N Roses, and it’s a full-bodied, open performance.

Given more space to breathe, the Roll 2 conveys more detail and expression than the original, too. You can hear the twang of strings on three different guitars, and even distinguish Axl Rose’s voice from Izzy Stradlin’s on the song.

The new Roll 2 is much more conscious of the shifting dynamics in a song. Fiona Apple’s vocals in Every Single Night are wonderfully clear and nuanced. The speaker shows off its dynamic skill as her voice rises in intensity and goes back down to a soft, strained whisper.

If you want even more bass, the B&O A1 will give you lashings of deep, rumbling bass from a similarly disc-shaped speaker. But it can sound overly rich, and costs significantly more at £200.

The UE Roll 2 may not go as deep and sound as solid, but it is a livelier and, we think, a more enjoyable listen. And it’s considerably cheaper.

The Roll’s design was a huge part of its appeal, and UE has been wise not to change it. The large ‘+’ and ‘–’ volume icons that adorn the speaker’s face are striking and intuitive to use, too.

There are buttons at the back for power and Bluetooth pairing, and it couldn’t be simpler to use: connect the speaker to your smartphone and just press play. There’s also a 3.5mm socket under a waterproof flap at the back for hardwiring your music player.

The Roll 2 remains one of the most portable-friendly Bluetooth speakers we’ve come across. The disc shape is convenient; it’s small enough (just 13.5cm in diameter and 4cm in height) and light enough (only 330g) to carry around in your bag or backpack.

Despite its petite, lightweight design, the Roll 2 never feels flimsy. In fact, it’s quite the opposite. It has a reassuringly sturdy feel to it, which reinforces its rugged, durable design.

The Roll 2 is built to be used outdoors, and as colourful and attractive as it is, we’re never worried about damaging it. It will survive knocks and drops, and if it gets muddy or dirty, you can simply clean it with good old soap and water.

It’s waterproof, too. The IPX7 certification means it can survive being dunked under one metre of water for 30 minutes – any more and it will conk out. For those that don’t want to submerge the Roll 2, the speaker now comes with a mini life preserver to float it on when you’re having a pool party.

We don’t have a pool in the What Hi-Fi? office, and the closest body of water to us is the River Thames. We decided not to test the UE Floatie (yes, that’s the official name) in its murky depths, but it’s a fun addition anyway.

The Roll 2 also comes with its trusty bungee cord loop strapped to the back, which you can use to securely attach the speaker to anything (or anyone). Ultimate Ears claims the Roll 2’s battery will last for nine hours, depending on how you use it and at what volume.

The microUSB charging cable is included with the speaker but the plug isn’t, which is disappointing. You’ll have to source a plug from somewhere else (such as your smartphone’s charger), but it’s an odd omission when everything else about the Roll 2 is so well thought out.

For instance, if you want to know how much charge is left on the speaker, press both volume icons at the same time and a voice will tell you the percentage.

Alternatively, you can download the UE Roll app to access more features such EQ settings, alarm clock, and Double Up – which lets you connect two UE Roll speakers together to play in tandem or in stereo mode.

The speaker comes in five colourful finishes: Tropical Anime (our review sample’s printed design), Volcano (black), Habanero (orange), Sugarplum (purple) and Atmosphere (blue). The large volume icons and bungee cord come in contrasting colours with each finish. The app also correctly displays the finish of your Roll 2, which is a clever little touch.

And finally, there’s a new ‘Block Party’ feature that you can use via the app. While you can play music from two devices at any one time, this new ‘DJ-friendly’ feature lets you and your friends join up to three smartphones and take turns playing music on the speaker.

The UE Roll 2 shows just how much it got right the first time round, with so many features hiding in that tiny design. Keeping its distinctive look unchanged was a good move, while the improvements in sound and the drop in price make it even better value than before.

If you’re after a compact, portable speaker that sounds great and is genuinely fun to use, we can’t recommend the Roll 2 highly enough.