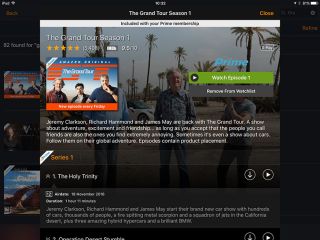 Oh look, an Amazon story not related to Prime Day! (Although if that’s disappointing to read, you can find a wealth of Prime Day 2018 deals here.)

Amazon is clearly hoping to get into more homes - not only with its Echo smart speakers and Music Unlimited service, but also with its Prime video and Fire TV offering… and maybe soon an actual television.

We’ve already seen Amazon integration in new Toshiba Fire Edition 4K TVs, and now Amazon looks set to release its own TV (according to The Telegraph).

We can’t confirm whether there will be just a single model or a whole range, and we can only presume it (or they) will be 4K and will support HDR10+, the dynamic metadata HDR format Amazon Prime has backed.

But we may see one on UK shelves soon, as it’s reportedly being confidentially tested by the Digital TV Group – the industry body for British digital TV broadcasters – after being developed with several Chinese manufacturers, including Huawei.

Amazon has already bagged Premier League rights for the 2019/2020 season, and if it continues down the broadcast route it could spell bad news for the likes of Sky and BT.

10 of the best home cinema deals on Amazon Prime Day

Save £50 on a Yamaha soundbar on Amazon Prime Day

15 of the best headphones deals on Amazon Prime Day