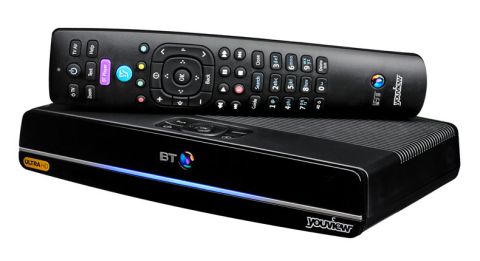 Competitive on the content, ease-of-use and pricing front, BT scores highly on both its hardware and service offerings

Ultra HD broadcasting may for some time be basking in newness and the promise of more to come, but the concept probably seems more habitual to the guys at BT.

The communications company launched The World’s First 4K Channel (BT Sport Ultra HD) back in 2015, following which came our four-star review of its debut Ultra HD YouView box. And now the TV service has had an update.

That said, BT’s 4K content scene hasn’t blossomed much since, which has to change soon if the company is to remain competitive. After all, Sky now has sport in Ultra HD as well as a movie library.

With BT, football remains the main draw, with UEFA Champions League, UEFA Europa League, FA Cup and Premier League matches (the latter all in Dolby Atmos too) joined by Aviva Premiership Rugby matches for eggball fans, MotoGP races for petrolheads and squash coverage for… well, those who like squash.

While Sky’s Store has rentable movies in UHD, the only Ultra HD content available on demand through the BT Store is past live sports events, previously shown on the Ultra HD channel.

There’s Netflix for 4K goodness too, of course, accessible directly from the G5 box to subscribers of the streaming service’s £8/month Ultra HD subscription.

It’s BT’s top-tier Total Entertainment package (£18/month) that you’ll first and foremost want to sign up for, though, which unlocks its 4K offering as well as expanding Freeview’s channel list to 141 by adding the likes of BT Sport, Comedy Central, MTV Music, and nine more (Disney, Nickelodeon etc) to keep the kiddiewinks happy.

That’s not half as many as Sky, however, which can offer over 350 channels (including some exclusive ones, such as Sky Atlantic), and still some way behind Virgin’s 250. You can add more channels, including Sky Movies and Sky Sports 1 and 2, but it’ll cost you, of course; £13.50 and £27 per month, respectively.

BT fights back on the exclusive front with AMC HD – the US studio behind Mad Men, Breaking Bad and The Walking Dead – so fans of the latter can eye up the superb zombie make-up in more gory detail.

Of course, that’s without factoring in on-demand content, of which there’s plenty.

As BT’s interface uses the YouView platform – a free service that uses the internet to bring Freeview and on-demand services under a single roof – you can feast on all the UK TV catch-up services (BBC iPlayer, ITV Player, All 4 and Demand 5) as well as Netflix, BT Player, Now TV and UKTV Play streaming services.

Having been treated to a very welcome lick of paint since we last saw it, the more-functional-than-flashy interface is built around an intuitive and unobtrusively translucent, over-the-top menu that pops up from the bottom of the screen.

Naturally, you also get all the benefits of YouView: a seven-day roll-back EPG with plenty of filtering options to highlight HD and Ultra HD channels, as well as a universal search bar that works across all the platforms; search ‘Breaking Bad’, for example, and it brings up both Netflix and BT TV Store results, helpfully showing what’s free to watch and what isn’t.

We feel it our duty to flag its lack of flagging for 4K on-demand content, however, as right now the only way to find it is by using the search bar.

The main limitation right now lies with BT’s ‘TV Everywhere with Extra Box’ multi-room option, the bomb drop being that you can’t add a second 4K box – a blow for those looking to take advantage of the growing affordability of 4K tellys for a bedroom.

BT has said it’s something it is considering further down the line, but for now you can only add a 500GB YouView+ box for £99 upfront and an extra £5 a month. Sky and Virgin’s multi-room solutions are a lot more comprehensive and versatile.

Customers taking out the Total Entertainment package do get access to the BT TV app (for iOS and Android), though, which allows the watching of select live (and on-demand) TV channels (BT Sport, Comedy Central and MTV among the most significant) on a computer, tablet or smartphone, with up to two separate devices registered at the same time, so look past hygiene concerns and you can watch TV on the toilet.

In a telly culture spearheaded by streaming and both online and offline on-demand programming, recordings may have become a secondary consideration.

Almost identical to the last Humax-manufactured BT box we saw, the G5 shares the compact easy-to-house guise of its predecessors and rivals, shorter albeit wider than the Virgin V6 but not quite as letterbox-thin as the Sky Silver.

As if a tribute to Stan Laurel, the remote is tall and slim, with a foolproof button layout and helpfully big, coloured menu keys.

If HLG ends up being as impressive as the other HDR formats we’ve seen (and the trials suggest it will), that’ll no doubt mean brighter, more nuanced colours.

But right now, as we boot up the Sony KD-49XE9005, we’re pleased with the G5 tuner’s palette and general picture-quality performance. Our only gripe is with the built-in Netflix app, which we find extremely laggy and jittery on a number of shows.

The live channel and on-demand content fare much better; on the BT Sport Ultra HD channel we watch Exeter take on Harlequins live, and then catch up with Bath versus Wasps.

Both streams are very sharp and flicker free with no lag, even during fast play. It offers a clear improvement over the Full HD channel, and has us crossing our fingers even tighter for more, and more diverse, content.

Let’s be honest, though, high-def programmes are what we’ll mostly be ogling for some time yet. It takes a middle spot in the rankings on this front, smidgens softer and less tantalizing than Sky’s picture, but with a realistically restrained palette that’s not as drab as Virgin’s.

MORE: BT Sport Ultra HD: What is it? How can you get it?

BT has, at the time of writing, something Sky and Virgin don’t: Dolby Atmos content, which, aside from a promising-sounding sneak preview at a BT-held event, we haven’t fully gotten our ears around.

As for stereo and 5.1 presentations, though, we can continue our praise confidently.

Again a middle-sitter between BT’s two biggest rivals, its clearer, more insightful and up-for-it presentation is preferable to Virgin’s (even if it is harder and thinner), but Sky tops the ranks with greater expression.

Like with Virgin’s V6 box, the G5 box and Total Entertainment package requires you to take out BT’s Infinity fibre-optic broadband, which has a maximum 76Mbps speed (although the ‘standard’ is 52Mbps) and, for unlimited data usage, starts from £37.50 a month and requires a £50 activation fee.

£65 may seem like a grand grand total to part with each month, but actually begins to look very reasonable when you consider Sky’s most basic 4K TV-only package is £54. Of course, if you factor in extra boxes and channel add-ons, that figure could well enter three figures.

The box itself is £250, for which there’s an optional £50 installation cost.

If you find Sky Q too expensive and aren’t thrilled about paying out for a Virgin box that doesn’t have any of its own 4K content, you may find a happy medium with BT.

It goes half of the way to match Sky Q’s modernity, and is on a par with its 4K offering (where sport is concerned, anyway) for a lower cost.

And hey, if you’re in the niche club of footie fans with a Dolby Atmos set-up, and are desperate to make the most of it, this could be the most compelling TV option there is.

See all our BT reviews