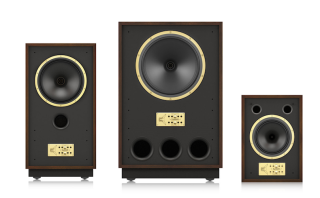 If you hark back to the era of flared trousers, Saturday Night Fever and the Ford Capri, Tannoy has just the thing for you. For those wanting to relive the glory days of 1970s hi-fi, the company is bringing back its Arden (middle), Cheviot (left) and Eaton (right) speaker ranges.

However, the Devon and Berkeley models from the original five-strong Legacy line-up (pictured below) are not being reintroduced.

Like the £17,000 Tannoy Gold Reference GRF, now a permanent addition to the Prestige range, the Legacy models will be built in the company's Coatbridge plant in Scotland. There had been much speculation that the Coatbridge factory would close under its new owners, Music Group - something which the company has since denied.

For our readers who are too young to remember, the Legacy series uses Tannoy's Dual Concentric Drivers based on the firm's HPD technology first developed in 1974, housed in traditional high density cabinets.

A 10in driver is fitted to the Eaton, the Cheviot gets a 12in unit and the Arden a 15in driver. All three models are equipped with a two-band energy control with boost and attenuation control for fine-tuning the speakers to the listening room they're used in.

And they all come with gold-plated, biwireable binding posts. A fifth binding post provides grounding to reduce radio interference and improve midrange clarity.

"These were our breakthrough speakers in the 1970s, which redefined the listening experience in studios and homes across the world," says Tannoy..

"The Legacy series will be hand crafted by our skilled workers in Coatbridge. Every speaker will include an ‘owner’s care package’ as well as a certificate of authenticity, signed by our experts," it adds.

We have asked for confirmation of UK prices and will update this story as soon as we get them.

MORE: Tannoy - after 90 years, what does the future hold?