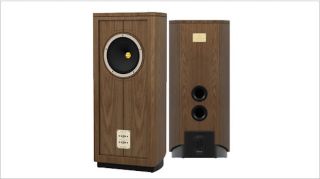 Last year Tannoy celebrated its 90th anniversary with a limited edition Prestige GRF 90 speaker, built in honour of the company's founder, Guy R Fountain, who started the company in 1926.

Tannoy claims the success of this speaker (only 90 pairs were made) convinced the company to create a permanent addition to the range.

Tannoy says the GRF "will be handcrafted in the UK", and the firm has confirmed to What Hi-Fi? that the new speakers "will be made in Coatbridge, Scotland". There has been much controversy about whether Tannoy will continue to manufacture products in Scotland since its takeover by Music Group, which is based in the Philippines.

Just before Christmas, Tannoy's new management denied it planned to end all speaker production in Scotland, despite reports from the GMB Scotland trade union to the contrary.

The new management, led by Music Group chairman Uli Behringer, has said it will keep some manufacturing in the UK, and will invest in a new R&D centre in Manchester. However, the bulk of speaker manufacturing will be transferred to a new $100m factory in China.

Tannoy has developed the Prestige GRF model using the 12in Dual Concentric Driver with Tannoy’s signature PepperPot WaveGuide, Alnico motor system and HF compression drive, all of which were used in the limited edition GRF 90.

The Tannoy Prestige GRF speakers are due to go on sale next month for £16,998 a pair.