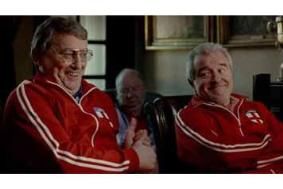 The offer will run from April 29th to July 11th, the day of the World Cup final.

Andy Benson, commercial director of Sony UK, says: "We understand that consumers will undoubtedly want to upgrade their kit as they gear up for the World Cup this summer, but cost is still an issue for most of us coming out of recession.

"This campaign is a good way to encourage the responsible disposal of old technology."

Shown residing in 'Bisham Abbey' retirement home, the 1970s-style TV they're watching the footie on is swapped for a new Sony Bravia TV, Blu-ray player and surround sound system.

Under the trade-in offer, the discounts available are as follows: