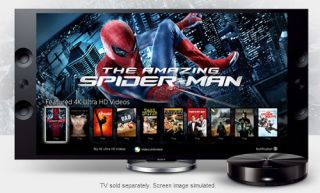 We've been wowing our eyes with the latest Sony 4K TV and now we have more news on the company's 4K Ultra HD Media Player and new Video Unlimited 4K content service.

Sony has revealed the FMP-X1 4K video player, which comes pre-loaded with 10 4K films, will go on sale in stores in the US by July 15th, and is scheduled to ship from Sony's online store by July 2nd.

Sony Video Unlimited 4K promises to be the "world's first and only network video service that gives you access to a regularly updated library of full-length 4K feature films and TV shows".

The FMP-X1 4K box will have 2TB of storage for 4K films, though Sony says this can be boosted by an external hard drive.

Sadly, Sony has said it has "no plans" for a UK release for the Sony 4K Ultra HD Media Player, so we're having to make do with Mastered in 4K Blu-ray titles for now.