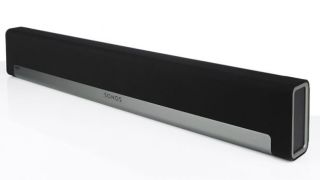 Sonos is all set to reveal three new products, according to a 9to5Mac report.

An 'anonymous 9to5Mac tipster' has said that a new Playbar, Sub and Play:5 speaker could be launched as soon as June. The most significant rumoured detail: the new soundbar will support Dolby Atmos.

That type of product, and that suggested release date, would tie in nicely with the company's 'S2' software update in June – a complete overhaul of the Sonos ecosystem's software, which brings an increase in audio bandwidth that will enable the introduction of "higher resolution technologies for music and home theatre". Such as Dolby Atmos surround sound technology.

Sonos has been tight-lipped on whether such increased bandwidth support will indeed pave the way for hi-res FLAC and MQA support for music, or Dolby Atmos for films. But this Atmos soundbar rumour does indicate that the latter, at least, could soon be part of the Sonos offering.

If an Atmos-supporting Sonos soundbar does transpire, it would, together with the also-rumoured new Sub subwoofer, presumably take the place of the 2013-launched Playbar and Sub, to sit beneath the smaller Sonos Beam. Will it, like the Beam, support voice control? Will it sport upward-firing drivers to deliver the height channels in an Atmos soundtrack, or rely on sound processing wizardry to create a sense of height through front-facing drivers? And how big will it be? Sadly, no such details have been implied.

We can, however, be pretty certain that a Sonos Atmos soundbar would cost a pretty penny. While Atmos soundbars are becoming increasingly accessible, they still attract premium prices, often north of £600 / $600. Our favourite so far, the Sony HT-ST5000, is still £999 / $1300 – despite having been heavily reduced since its 2018 launch.

The tipster has also said the next-generation Sonos Play:5 speaker will arrive to replace the 2015-launched original Play:5, but, again, that suggestion comes without specifications and features details.

Sonos Beam vs Playbar vs Playbase: which is best?