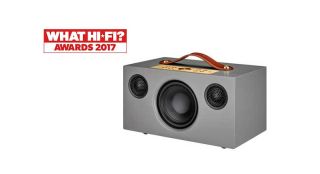 With a moniker like Audio Pro, it might come as little surprise that the Swedish manufacturer dominates our Awards category for wireless speakers this year.

Self styled as the ‘Sound of Scandinavia’, with its Addon T3, Addon T5 and Addon C5 speakers Audio Pro is also likely to be the sound of thousands of living rooms worldwide once its products' talents have been established.

The Addon T3 (above) is no stranger to the What Hi-Fi? Awards, having picked up the midrange portable speaker accolade in each of the past two years. But 2017 marks the Audio Pro's inaugural triumphs in our mains-powered categories, as it earns stripes in each of our classes for speakers priced up to £500.

First comes the Addon T5 which, while undoubtedly the T3’s sibling in terms of its character, adds the extra muscle and authority you’d expect from its superior physical heft.

The Addon C5 (top), in tandem with Audio Pro’s control app, now also adds multi-room capabilities to one of our favourite speaker ranges, communicating even with its Bluetooth-only brethren to allow their full integration to a house-wide system.

Elsewhere it’s a testament to the quality of previous years’ champions that there are no new names, with each of the UE Roll 2, the Dali Katch (2016’s Product of the Year) and the seemingly indomitable Naim Mu-so (above) returning to the stage to collect their annual Awards.

The last of these in particular remains the closest thing we’ve heard to hi-fi quality from a one-box wireless speaker and, as more and more contenders fall by its sword, even a £100 price hike (to very nearly £1000) from when we first tested it seems near-inconsequential each time it fills our test rooms with its bold and expressive performance.

You can find out which of these six equally expert performers is named our wireless speaker Product of the Year when the winner is announced at our ceremony on 15 November.

MORE: All the winners from the 2017 What Hi-Fi? Awards