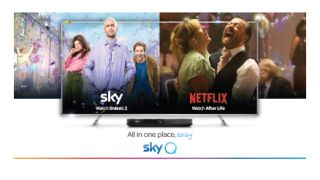 Sky has launched its next slate of on-demand programming in high dynamic range, with more scheduled to arrive in the next month.

Following the three Sky Nature documentaries that landed on the platform in HDR in May, the second season of Sky Atlantic drama Britannia and Sky Original political drama Cobra are now available in the superior picture format.

In the following weeks, four more Sky Originals with be available in HDR: season two of Bulletproof will arrive on 13th August and Save Me Too is slated for "late August", while A Discovery of Witches and the second season of Brassic are pegged for September and "late September" respectively.

Providing you have a HDR-capable Sky Q box, a TV that supports the HLG (Hybrid Log Gamma) HDR format and a Sky Q or Sky Q Ultra HD subscription, you will be able to watch these shows on-demand in HDR.

Sky promises to expand its slate of HDR content, with Sky Cinema movies coming by Christmas and live sport kicking off sometime next year.

Sky Q gets a facelift and Disney+ HDR support