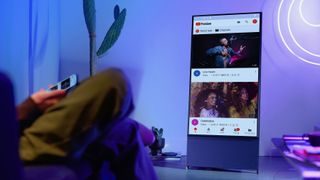 Back in April, Samsung announced a vertical TV called Sero for its domestic Korean market. Now it's announced the set is coming to the West.

Sero flips from the traditional horizontal (aka landscape) orientation to vertical (aka portrait). It's aimed at millennials who can't get enough of online videos from platforms such as TikTok and Instagram, and are fed up of the picture not filling their TV screen.

The TV has a built-in, non-removable stand that gives it enough clearance to not hit the floor while rotating to vertical mode. The stand also includes a 4.1-channel, 60w speaker system.

It has some more neat tricks, too. Samsung Galaxy owners can start screen mirroring from their mobile device by tapping it against the Sero's frame. And it supports Apple's AirPlay 2, so iPhone owners can beam their content to it too.

In terms of bread and butter specs, it's not the greatest. It's 4K and uses a QLED screen, but lacks full-array local dimming, so we can't imagine the picture will trouble the best sets around.

Still, it's only 43 inches in size, so is probably intended for a teen's bedroom rather than the lounge.

It's coming to the US and "several global markets" this year. Pricing and availability are still to be confirmed.