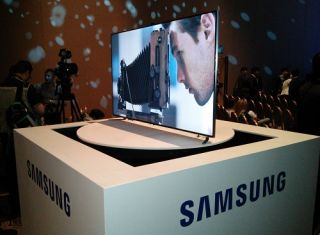 Samsung used its CES 2013 press conference to reveal an 85in Ultra HD 4K TV, a new flagship LED model, the F8000, plus a wealth of new clever connectivity and a new look Smart TV platform.

Smart TV was once more the central focus of all the Samsung 2013 TVs, and there's a newly designed interface, which features new content hubs and features.

Voice and gesture control is once again prominent, with a new S-Recommendation feature responding to your voice commands for content as well as suggesting things to watch based on your viewing history.

But it was the 85in S9000 Ultra HD TV (below) that drew most attention. Samsung's UHD set promises a picture of "unmatched clarity", naturally, and features a striking stand design.

The Samsung 4K UHD set also has a 120-watt array speaker setup built in to the eye-catching frame of the television.

Samsung also introduced its new flagship TV for 2013, the F8000 LED TV (below and top). Another ultra-thin set, it has a bezel under 0.25in thin and a very nice looking "half-moon shaped Arc stand".

The TV is Samsung's first to have a quad core processor and also supports the HEVC high compressison video codec for internet content. It's available in sizes up to 75in.

All of Samsung 2013 TVs feature the new S-Recommendation with Voice Interaction feature, which sounds like a TV version of Siri (or even S Voice).

Building on the voice control features on 2012 TVs, S-Recommendation allows you to simply ask your TV what to watch or search for content by TV shows, film names, actors and more.

Samsung's 2013 TVs will search across live TV, on-demand content and smart TV apps to find the content you're looking for. At least that's the theory.

The platform will also learn from your viewing habits to better tailor your content suggestions.

There's a new look Smart Hub interface on Samsung's 2013 TVs, which once more wil be the focus for the TV - your set will turn on and go straight to this new hub.

Five pages of content will guide you through On TV, Movies & TV Shows, Photos, Videos and Music, and Apps; bringing live, on-demand and app content together.

There was also a first sighting of the much talked about Evolution Kit, which promises to upgrade your Smart TV so it's not left behind as new technology and content software is released.

The box, around the size of an Apple TV box, slots in to the back of your TV and allows you to upgrade your TV's software to the most recent Smart TV content so you're never left behind.

There's no word on a price or release date for the Evolution Kit as yet, however.

We'll be heading to the Samsung stand at CES 2013 tomorrow so look out for more news, pictures and videos from the stand.

See all the news from CES 2013 in our dedicated blog