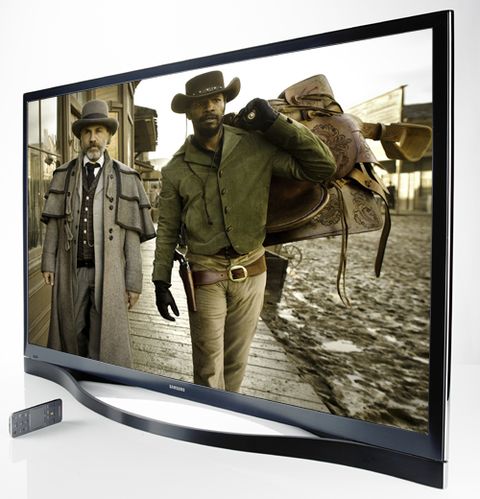 Samsung’s quest for flatscreen domination has never just depended on its range of highly capable LCD sets; the company has a fine track record with plasma TV, too.

The Samsung PS51F8500 is one of two new models in the Korean giant’s 2013 high-end Series 8 plasma TV range – the other being its 64in big brother, which retails for a hefty £3000 – which will hope to work alongside LED sets such as the UE55F8000 in Samsung's continued quest for world (consumer electronics) domination.

After a look at the Samsung PS51F8500 TV's features list, we were left wondering what else Samsung could have added; this really is a heavily specified set. On a basic level it’s a Full HD, 3D TV with comprehensive smart capabilities.

Dig a little deeper and you’ll come across voice and gesture control, a built-in five-megapixel camera with face recognition plus the ability to mirror content with smartphones and tablets such as the Samsung Galaxy S4. Like we said, it’s cutting-edge as far as the spec sheet is concerned.

The Samsung PS51F8500 is relatively straightforward to set up. Its menus are well laid out, but as usual there are plenty of active picture-processing modes to play with. This can take a fair bit of time to optimise – we preferred most of the modes turned off, leaving the motion processing on its 'low' setting – but much of this is down to taste.

We like the new Samsung Smart Hub layout. It isn’t quite as nice to use as Panasonic 2013 effort but remains unarguably one of the best examples of its type. We like the logical layout, which splits into various sections such as Movies, TV and Apps, and makes navigation easy.

For the time being – and this is a rapidly developing area – this Samsung is about as well stocked as it gets when it comes to services and apps.

Along with the ubiquitous catch-up service BBC iPlayer, there’s 4oD as well as film streaming options such as LoveFilm, Netflix and Blinkbox, among others. There’s also a comprehensive array of social apps, including the likes of Skype and Facebook.

This set can connect wirelessly to your home network, but for the most stable results we always recommend going the wired route if possible. Thanks to a new quad-core processor, the Samsung PS51F8500 responds quickly to commands and loads-up video content with speed.

Once up and running the results from BBC iPlayer and 4oD are excellent – good enough, in fact, to forget that the picture isn’t from one of the better broadcast channels. Detail levels are crisp and there’s very little of the motion and blocking issues that streaming video usually entails.

Once we move away from the Smart Hub and start using the rest of the TV's capabilities we find we’re still not fully convinced by Samsung’s implementation of voice and gesture controls.

While clearly improved over earlier efforts, the voice commands remain a little hit and miss, and certainly behind the dependability that Panasonic has engineered into its latest products.

Still, when it comes to searching for specific things via the built-in browser it’s a useful feature. We’re less keen on the gesture control, which, despite improvements from last year, still feels like a gimmick and quickly becomes frustrating as the novelty wears off.

The Samsung PS51F8500 plasma TV is supplied with two remote controls, as is the current trend with upmarket televisions.

One is a fairly compact traditional affair packed full of buttons, and the other is a simplified unit that includes a touch-sensitive trackpad and the microphone for voice control. We like the simpler handset best: it feels like a quality item and is pleasant and intuitive to use.

As expected, the PS51F8500’s connectivity is good. The highlights are four HDMI inputs – Panasonic, take note – and three USB inputs as well as the usual legacy analogue Scart, component and composite inputs, though these need (supplied) adapters to work.

There’s the usual slot for Samsung’s Smart Evolution kit, too – it’s a great feature where this set can be kept up-to-date in the future with the addition of an upgrade module. The module to bring 2012 sets up to current standards costs £250.

The PS51F8500’s general build is good. The TV looks classy, though we’d have to question the swoopy stand design.

The Samsung stand looks stylish and relatively stable, but means this TV won’t look at home on anything other than a support that’s wider than it is. When the TV measures almost 120cm wide that negates many of the supports we traditionally recommend.

There are many enthusiasts who still believe that plasma panels are the only way to go for ultimate flatscreen TV picture quality. While we’re nowhere near that dogmatic it’s fair to say that viewing the Samsung PS51F8500 gives this argument plenty of ammunition: it delivers an impressively crisp and clean picture, regardless of source.

This set has twin Freeview and satellite tuners, so you can watch two different channels at the same time using the picture-in-picture feature or watch one while recording another to an external hard-drive using the set’s USB connection.

It says a lot for the quality of these on-board tuners that the results look so clean and relatively noise free, even on some of the channels known for their slightly ropier picture quality.

Watching a re-run of Top Gear on Dave can be a blurry experience, but not on the PS51F8500. While it’s clear the Samsung is capable of far better, the results are stable and pleasingly precise, even as the test cars zoom around the show’s famous airfield-based test track.

Move on to the DVD of X-Men: First Class and the Samsung PS51F8500 continues to pile on the plus-points with excellent video scaling.

At times during this film it’s fair to say the results were good enough to have us wondering whether we’d loaded the Blu-ray version of the film by mistake. The clarity of the picture is terrific, considering the resolution of the source material.

Try a Blu-ray – we used discs ranging from our old favourite Star Trek to the quirkily animated ParaNorman – and the results are spectacular. The PS51F8500 can now lengthen its stride to show what it can really do.

We’ve noticed that Samsung has gone for a more natural-looking colour palette with this year’s TV sets, and this plasma continues that trend. The picture is less overtly impressive, but start watching carefully and it’s hard to be anything other than massively impressed with the way this screen reproduces difficult-to-do things such as grass and skin textures.

There’s plenty of subtlety to the way shading is handled, and superb reach when it comes to delivering dark blacks and bright whites in the same frame. The F8500 being a plasma also means the patchy backlighting that afflicts some LCD alternatives isn’t even an issue.

It’s fair to say that Panasonic’s top TV offerings are more dramatic in the way they render bright whites and very deep blacks, and some people will prefer that. For us, however, Samsung’s more understated approach is an equally viable alternative: it won’t draw your attention to the picture itself, but it won’t distract either, letting the film, programme or whatever else you’re watching take pride of place.

We’re also taken with the way this set handles motion. Even during some of the more frantic screen of Mission: Impossible – Ghost Protocol this Samsung stays composed and stable. There’s little of the blurring or image instability from which flatscreen TVs have traditionally suffered.

This composed way with motion helps with the 3D of ParaNorman, too. The PS51F8500 comes with two pairs of active glasses, and it’s fair to say the combination of plasma screen and improved 3D processing have resulted in far more enjoyable results than the company’s previous efforts.

We still don’t find it as comfortable for long-term viewing as passive alternatives, but as far as active systems go Samsung is up there with the best. The sense of depth is excellent, as is the way – with suitable source material – it layers the picture. The result really is closer to the ideal of 3D rather than just looking like a layered 2D diorama.

Samsung’s engineers have obviously had a long, hard listen to their flatscreens and decided things can be better. The sound of this year’s models, at least the ones we’ve reviewed, has taken a clear step up.

The Samsung PS51F8500 is no different. It uses two 10W-per-channel amplifiers with downward-firing full-range drivers. While there’s no additional bass unit to add extra sonic authority, the sound is still smooth and weighty enough to allow comfortable listening.

We’re not saying it’s any substitute for a decent sound bar or dedicated home cinema set-up, mind, as there isn’t the dynamic reach or transparency these alternatives would provide.

No set is perfect, of course and it’s fair to say that in some respects – most noticeably the way voice and gesture control works – there is clear room for improvement.

But, given the vast range of smart content and generally excellent picture quality of the Samsung PS51F8500 we can’t help but recommend it highly.

That said, we’re awaiting 2013 sets from all of Samsung’s rivals; the battle for big-screen honours has barely begun...

MORE: Samsung TVs get bigger and smarter for 2013