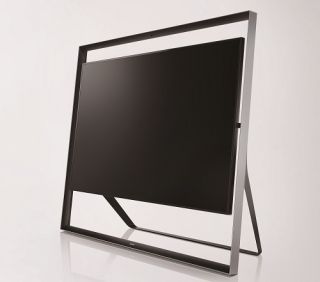 Samsung used this week’s European Forum in Monaco to put some flesh on the bones of the TV announcements it made at last month’s CES in Las Vegas.

As far as TVs are concerned, Samsung is convinced it knows what customers are crying out for: premium design, superior picture quality, smarter Smart features and larger screen sizes – so its 2013 range of TVs seeks to address these requirements as fully as possible.

The Samsung Evolution Kit was also confirmed, allowing owners of 2012 generation Samsung TVs to upgrade many of the features on the TV to the 2013 spec.

Thoughtful, upmarket design features across the F8500 range (pictured, top). Featuring a frame made from a single piece aluminium – it’s a style Samsung is calling ‘Magnum’, which is sure to please all Zoolander fans.

Even the camera (for motion control, Skype and so on) retracts into the frame when not in use. And its use of a quad-core processor promises fast toggling between online services, apps and TV services.

And with the remarkable UHD TV 85S9, Samsung hopes to cover off premium design, picture quality and larger screen sizes all in one go. This is the TV that Samsung teased in a video trailer as a technology breakthrough before CES.

An 85in screen in an easel-style frame (which incorporates a 120-watt array of speakers), it’s a 4K-resolution TV that’s as much a statement-of-intent product as it is a cutting-edge technological tour-de-force. As well as being a big TV, of course.

Samsung’s 2013 TV line-up will be available to buy in the UK "in the first half of 2013" with UK prices to be confirmed.