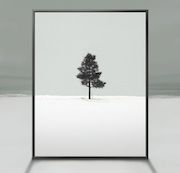 Not to be outdone by Korean rival LG, which seems to have already set out its stall for CES 2013, opening next week in Las Vegas, Samsung has announced three new monitors including a 24in touchscreen model optimised for Windows 8.

And the Korean giant is also hinting at a breakthrough TV technology to be launched at the show, with teaser videos and pictures (above) suggesting a floorstanding 'picture frame' design.

The teaser video, available on YouTube, promises 'a new TV at CES that is unlike anything the world has ever seen', while the teaser picture Samsung has released suggests a vertical design. The company will announce the new products at a press conference to be held next Monday, January 7th at 14:00 (22:00 UK time), ahead of the show's opening on Tuesday, January 8th.

However, already announced is a trio of computer monitors for professional and consumer use, including that 24in touchscreen model, the SC770 (above), enabling 10 points of simultaneous touch, allowing images on the screen to be dragged, rotated or selected. Its stand allows a 60-degree tilt, and it's said the combination of thin bezel and wide viewing angle allows 'a truly immersive viewing experience.'

The new monitor will be avallable worldwide in the second quarter of this year, along with the 27in SC750 (above), which allows 90-degree screen rotation, so images can be viewed in portrait or landscape formats.

These two new monitors, each offering 1920x1080 resolution, will join the 27in S27B970 2560x1440 model already announced, which offers the benefit of built-in calibration. Each S27B970 is individually hand-tuned by Samsung technicians before shipping.

CES 2013: what to expect from the world's biggest technology show