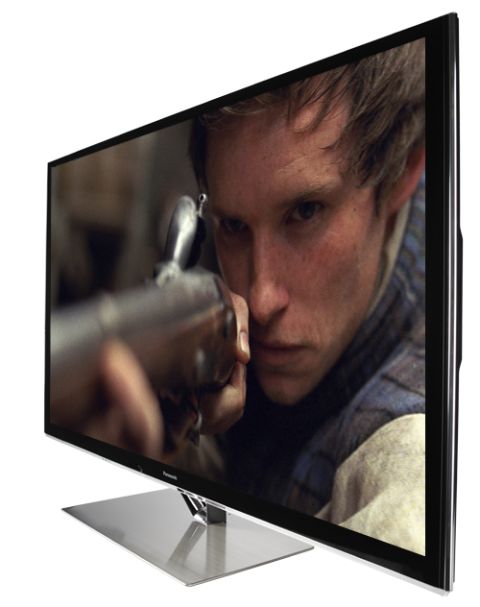 Best 55in+ TV, Awards 2013. A simply stunning screen that’s engaging to watch and comfortable to use – this is a great TV

We’ve long been fans of Panasonic plasma TVs, and by now we’re all aware of the news that Panasonic is stopping R&D of plasma display panels. But that doesn’t mean the firm has stopped making plasma TVs, as the Panasonic TX-P55VT65B proves.

With a Full HD, active 3D screen that’s filled to the brim with new smart features and a variety of control options, the TX-P55VT65B certainly promises a great viewing experience for £2400.

Let’s cut to the chase: we can’t fault this screen – it’s simply beautiful, and delivers a captivatingly immersive viewing experience.

Detail is sky-high; there are layers upon layers of subtlety here that give the picture a lovely sense of depth and insight. Picture definition, too, is accurate without edges being over-sharpened, and the overall clarity on offer is remarkable.

The picture is smooth and clean, too: the VT65’s talent with contrast shines through in hard-to-render dark scenes: black levels are velvety deep, with whites punching through. Shadows are never lost, while textures of different materials are fully conveyed.

Last year, Panasonic plasmas had a subtle almost sepia-tint, but there’s no hint of that in the TX-P55VT65B. The colour palette has a well-balanced natural tone, with colours looking pleasingly lifelike.

To test the broadcast channels we settle down to watch the live practice sessions for the Chinese Grand Prix. Formula 1 cars whizzing across the screen could easily be a motion-handling nightmare for any TV – but this Panasonic once again impressed us with its smoothness.

F1 cars raced by the track with no distracting judders or blurring and, coupled with the stark clarity and detail definition, it’s an exciting watch. While standard-definition TV and DVD films have an inevitable drop in resolution, the Panasonic TX-P55VT65B still delivers a clean and detailed picture.

And that smooth motion comes in handy when watching 3D films such as Dredd. Panning shots across the dystopian landscape of Mega City One are smoothly handled with only the slightest hint of instability – but it’s a much subtler effect than previous 3D sets.

While we prefer the easy-on-the-eyes effect of passive 3D, the dramatic sense of depth you get with active sets is a major attraction. You get two pairs of active-shutter glasses with the Panasonic. They’re similar in design to the lightweight passive pairs that you get with the LED TVs, but these are slightly heavier. Our eyes didn’t get too weary too fast when watching in 3D, either – it’s one of the better active sets we’ve seen recently.

The biggest overhaul seen across Panasonic’s 2013 TVs is a redesigned interface that offers a more personal experience for users. Instead of one static screen or themed panels for each type of smart feature, the new My Home Screen lets you mix and match apps and content in one place.

There are four standard screens with up to seven customisable ones – all are neatly arranged and easily accessible using the ‘Home’ button or, if you fancy using voice commands, by saying ‘My Home Screen’ into the Touch Pad Controller’s microphone.

There’s a permanent panel reserved for live broadcast TV, but you can add shortcuts to BBC iPlayer, Netflix, Twitter, weather apps, your favourite web pages and preview Freeview or Freesat channels all in one page.

It’s a great feature and is wonderfully easy to use. We had our own home screen set up in seconds, and while it might not be as slick or stylish-looking as Samsung’s revamped Smart Hub, it’s much more intuitive to navigate.

Manufacturers are constantly finding new and more interactive ways for you to control your telly, and Panasonic offers no less than five methods here. First, there’s the standard (logical, nice to use) remote control.

But if that feels a bit old-fashioned, you might prefer the Touch Pad Controller. We certainly did; the egg-shaped remote nestles comfortably into the palm, and the touch-sensitive pad is very responsive and easy to manipulate with a few simple gestures. There’s also a small niche with an ‘OK’ button cut into the back of the remote where your finger naturally crooks in – it’s a nice, ergonomic touch from Panasonic.

And if you want to keep things simpler by using your smartphone or tablet to control the TX-P55VT65B, Panasonic has updated its control app to Viera Remote 2. This includes a revamped interface with a full Smart Calibration section for controlling and adjusting all the picture settings.

The app also has an updated Swipe & Share feature. This lets you share photos, videos and music (Android only for now) from your device to the TV (and back again to your or a friend’s smart device). The control app’s interface guides you on the direction of the swiping, and on the whole it’s a simple and uncomplicated feature as long as all the devices and the TX-P55VT65B are connected to the same network.

The fourth way to control your new Panasonic plasma TV is with voice commands. We’ve already encountered – and been frustrated by – voice control in Samsung’s Smart TVs, but it’s the first year that Panasonic has featured it. And we were delighted to find that it works with minimal amount of fuss or setbacks – voice commands are recognised instantly and correctly on the whole, and the search terms used had a logical pattern to them.

You’ll need the Touch Pad Controller (or the smartphone app) to use this feature. Simply press the microphone button and say a simple command – reaction times are quick. We’ve previously panned voice controls as it still felt clunky and slow when in use – but Panasonic’s version does make it more attractive and easier to use.

While we’re on the topic of new smart features, one of the most interesting things about the TX-P55VT65B is that you can draw straight on to the screen. Before you take a biro to that plasma screen, Panasonic has included an Electronic Touch Pen instead, with which you can draw on paused screens of live TV, as well as on photos sent from your smartphone to the TV using the Swipe & Share function on the control app.

The Touch Pen itself a long, slightly bulky white pen, but it’s comfortable to hold and there’s no need for any additional software to make it work. There’s no danger of scratching that beautiful plasma screen, either – no really – the nib is smooth and rounded and rolled over the screen smoothly.

Of course, we’d caution anyone – adults and children alike – to bang on the screen with it, but overall, it was safe and scratch-free to use.

Connect the Touch Pen by clicking its power button, then simply tap on the screen to start writing and drawing. You can pause live TV to scribble on top of a screenshot, add messages to photos, play interactive kids’ games, and click links on web browsers using the Touch Pen.

You can choose from a palette of colours, switch between a pen or paint bucket tool, undo or erase what you’ve scrawled, and once you’re done, save your masterpiece to a connected SD card or USB memory stick, and download it to your smart device using Swipe & Share gestures.

This type of feature would normally be sent to the gimmick pile, but we have to admit – it does work really well. The Touch Pen flows really smoothly, and is surprisingly responsive to handwritten text and scribbles. The sheer fact that it works so well makes it rather fun to use.

We’re not sure we’d use it strictly as a photo-editing tool when more sophisticated alternatives are available on your smartphone or computer, but it’s a fun option to have. We think kids will enjoy it as well, if parents reading this are brave enough to let their toddlers poke at a brand new £2400 TV with a (electronic) stick…

The TX-P55VT65B stands sturdy and elegant on its square metal stand. The shiny V-shaped supporting frame might have attracted a bit too much attention when paired with smaller screens such as the TX-L47DT65B, but with the TX-P55VT65B, it’s the slim and narrow-bezelled 55in ‘NeoPlasma’ screen that dominates the room.

Hidden away in the top frame is a built-in camera – this option is only available for the VT65 and WT65 series, and it’s useful if you want to make Skype calls or use the face-recognition feature with your personalised My Home Screen. You can angle the camera towards you, but the camera itself feels a little bit flimsy and added-on. The Samsung’s new sleek and smooth retractable camera had a more quality and integrated feel to it.

A key feature of the TX-P55VT65B is twin HD tuners for Freeview HD and Freesat HD – so you can watch live broadcast TV while recording another channel at the same time. It also allows you to use Panasonic’s multi-window feature, where you can watch the latest Scandinavian crime drama while also keeping an eye on the live football scores.

Other connections neatly arranged at the rear panel are three HDMI inputs (a standard across all top-ranging Panasonic TVs this year), three USB ports, component, composite and RGB scart inputs, digital optical and headphone outputs, and a slot to input SD cards from cameras. You can also opt for either a wired or wireless connection to your home network, as the TX-P55VT65B has an ethernet LAN port and built-in wireless connectivity.

We’ve picked upon the thin and lifeless sound coming from flat screen TVs for a few years now, and it’s about time manufacturers started doing something constructive about it.

The TX-P55VT65B features long, slim front speakers inlaid into either side of the screen – and a 7.5cm woofer hidden away – as its 2.1 sound system. A total output of 20W doesn’t sound like much, but it’s in the quality of the sound that we’re interested in – and it’s a definite improvement from previous screens.

There’s a rounded quality to the sound, which has more weight and solidity to give it definition. There’s no thin or bright edge to the dialogue, and sound effects have more punch and power behind them.

We did find ourselves increasing the volume just to get a touch more clarity, but it didn’t grate on the ears. While we welcome the added muscle behind the sound, we’d still recommend investing in a full speaker package if you want to get the most out of the TX-P55VT65B, because the picture of this plasma TV is really something special.

Plasma may be coming towards the end of its lifecycle, but the Panasonic TX-P55VT65B proves the technology still has much to commend it. We like how easily laid out the new smart features are and how intuitive it is to use the new controls.

But overall, it’s the quality of the picture that truly impresses. We haven’t seen such a clear and smooth screen – the picture itself is worth its asking price of £2400.