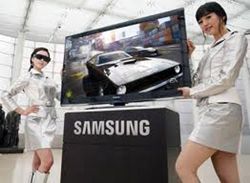 Samsung has poured cold water on rivals' promises to deliver 3D TV without the need for glasses, by stating it thinks it unlikely it will produce such a set in the next 10 years.

Toshiba has been bullish about its glasses-free 3D TV plans, promising a set within this financial year, but Samsung sees too many obstacles to back the technology.

In a statement given to US website SlashGear, the company said making such a set with enough viewing angles to be practical – 32, in Samsung's opinion – would take some five years of R&D.

The company concluded that "attempts to put glasses-free 3D TV to market within the next 10 years will be difficult".

Samsung itself has backed active 3D TV technology and recently announced its 2011 range – and you can read our first review in the April issue on sale now.