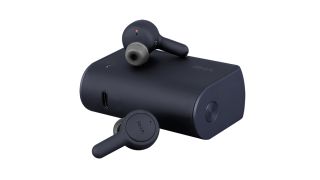 RHA is behind one of the more impressive pairs of budget true wireless earbuds we've reviewed, the four-star TrueConnects – and their sequels, which arrive today, look even more promising.

If you're looking for AirPods-style earbuds that won't require constant charging, the RHA TrueConnect 2s should probably make your shortlist.

Their claimed battery life is an impressive 44 hours – nine hours in the earbuds, plus an extra 35 hours from the case. That's a lot more than the Apple AirPods' and Sony WF-1000XM3's 24-hour figure. Sticking the empty buds in the case for 10 minutes gives over an hour of playback, too.

RHA has also refined the sound, which we described as rich and faithful and essentially "better than average" in the originals.

There are now touch gestures for controlling playback and launching Siri, Google Assistant and Alexa voice control, and the design is dust-, sweat- and splash-proof. The TrueConnects don't offer noise-cancellation, but RHA has implemented mics on each earbud to remove background sounds during calls.

Bluetooth 5.0 support returns, but, considering the improved reliability of true wireless earbuds, we hope the issue with wireless dropouts between earpieces that hampered the originals has been addressed.