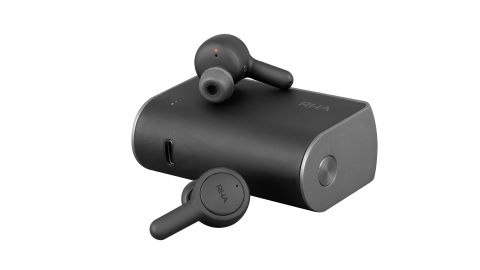 The concept of convenience is subjective – take ‘true wireless’ earphones, for example. While they get rid of the inconvenience of being tethered, they also force you into a much closer bond with another kind of wire – the charger cable.

This type of earphone is starting to make progress in terms of technology. The RHA TrueConnects have a respectable five hours of battery life between charges, they sound good and cost roughly the same as a pair of AirPods.

But unlike their Apple near-equivalents, RHA has not quite managed to nail the connectivity. As a result, they suffer from Bluetooth blips you won’t get from the top performers at this price point.

RHA’s TrueConnects are clearly inspired by the Apple AirPods, with a soft touch plastic stem pointing down when in your ears. It’s not just there for weight balancing, there’s a little pinhole mic at the bottom, which picks up your voice more clearly. This also allows for good active noise cancellation during calls.

One mic on the back of the earpiece focuses on the ambient noise, while the stem mic picks up your voice. Subtract one from the other and you’re left with more-or-less just your voice on the line.

While these TrueConnects may appear similar to the AirPods, they are more than just a cash-in on a growing tech subgenre. They’re comfortable, and provide surprisingly effective passive isolation, particularly when used with the supplied Comply foam tips. Several sets of standard silicone tips are also included.

Battery life is towards the upper end of the true wireless spectrum. They last around five hours between charges, and the battery of the case can recharge them up to four times.

The RHA TrueConnects’ case design is neat, but somewhat fiddly. The aluminium cover flicks open to reveal the buds’ beds, but as their stems stick into the case, and the opening is fairly small, freeing them can feel like fishing the last olive out of a jar. However, we do like the magnets that keep the earpieces in place while charging. Turn the case upside down and they don’t fall out.

Connectivity is the RHA TrueConnects’ one major issue, with some owners highlighting a lack of Bluetooth stability. In our experience, they’re not that bad, but also not quite good enough for a pair of headphones costing £150.

The connection between your phone and the primary earpiece is generally fine. However, the left one has a habit of phasing out for a fraction of a second, particularly when on the move.

That every other part of the hardware seems well-considered only makes this more disappointing. The case has a handy little triple LED indicator to show the battery level, it fast charges the earphones and the earpieces themselves are IPX5 water resistant, which means they are ‘sweat-proof’.

The controls on the back of each earpiece are also simple to use for the basics, but offer comprehensive control too. There’s a single button on each – long-pressing either button turns the pair on and off, while a short press acts as play/pause. Double and triple gestures alter volume, change tracks and connect to your phone’s digital assistant, though you may need to dig the manual out to learn the appropriate moves.

The RHA TrueConnects are one of the better-sounding sub-£150 true wireless earphones we’ve heard. They angle towards a neutral tonal balance, but the bass filler injection has been applied subtly enough to avoid turning a hi-fi style earphone into a ‘bass-head’ one.

Treble is detailed and largely non-sibilant, but gets there in a slightly odd way. Higher frequency response appears to be rather non-linear, with certain emphasis spikes. It leads to a slightly digital character that, while not glaring, does limit how natural these RHAs sound.

The bass can also be an issue at times. Low-frequency separation is slightly flawed, reducing the coherence of what is otherwise satisfying sound.

But the RHA TrueConnects’ problems are minor compared to those of many true wireless earphones. Despite the issues at both ends, they remain more able than Apple’s similarly priced AirPods.

The RHA TrueConnects are a sure sign that true wireless earphones are coming of age in terms of their sonic performance. Their connection performance falls behind the best, though. Inter-ear blips are common, demonstrating Bluetooth 5.0 alone isn’t enough to fix the occasional signal issues.