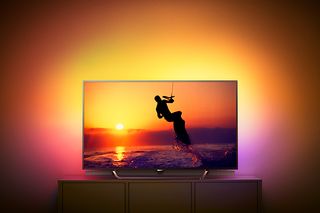 The 8602 is a 4K LCD TV (with edge-lit LED backlighting) featuring quantum dot technology - the first Philips TV to do so - and comes in 55in and 65in screen sizes.

Philips claims the 8602 delivers a peak light output of 1100 nits and 98 per cent of the DCI-P3 colour gamut, meaning the set qualifies for UHD Premium certification.

The 8602 also features HDR10, Android TV OS and Google Assistant voice control (which will be available with Android Nougat - the update is due in 2018), and, we presume, the usual complement of Netflix, Amazon Video and other TV apps.

Philips also launched a new OLED 9 flagship TV, and at 65 inches, it's the largest OLED TV in Philips' arsenal, joining the 55POS9002 and 55POS901F TVs in Philips's OLED range.

Philips claims this thin, 'bezel-less' OLED 9 TV delivers 900 nits of peak brightness and a wide colour gamut (99 per cent of the DCI-P3), and is also UHD Premium certified. Philips is promising excellent black levels, contrast and colour dynamism to back-up those figures. We shall see.

We'll update with prices and more information as soon as we know.

Samsung partners with Panasonic and 20th Century Fox for HDR10+