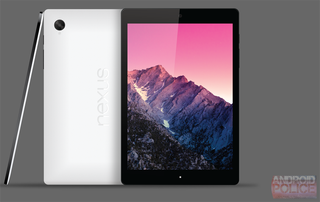 Google may not have confirmed the existence of a Nexus 8 tablet, but that doesn't stop analysts and insiders from predicting the specs and features.

The new Nexus 8 tablet is expected to be made by HTC. Whether or not it will come in a similar aluminium finish as the HTC One M8 phone remains to be seen - a Nexus tablet designed in a similar vein certainly sounds good to us - but rumours that Google would be working with HTC on upcoming Nexus devices surfaced earlier in the year.

Twitter user @UpLeaks claims the tablet - codenamed T1/Flounder/Volantis - will come sporting a 64-bit Tegra processor; a MDM9x25 modem for the 3G model; 4GB of RAM; NFC; GPS and, interestingly, Android L out of the box. Other specs are rumoured to include an 8MP rear-facing camera and 1.6MP front-facing.

MORE: Android L: everything you need to know

GForGames claims the Nexus 8 - this time with code number 0P92100 - has been certified by the Radio Research Agency (RRA) in South Korea. The tablet will allegedly hit shelves in Q3 2014.

It's also expected the tablet will come with an 8.9in display to take on the likes of the Apple iPad Mini and the Amazon Kindle Fire HDX.

Dave Burke, an engineering director at Google (Android), confirmed earlier this year that a new Nexus device could be expected later in 2014. He didn't confirm, however, if this would be a new smartphone or a tablet.