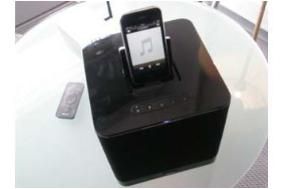 You'll need to buy an add-on USB dongle transmitter for your computer, though: this will cost around £75. But with this wireless in place, you can also daisychain several rCubes together around the house, with each one having both receive and transmit capability.

The rCube has 2x50W Class D amplification onboard, and uses opposed woofers plus a tweeter for each channel.

The Kleer wireless system is also an option for the Arcam DAC, which is now nearer to the shops: it'll sell for £299 as standard, uses 24-bit 192kHz Wolfson conversion, and will also be available at £375 with the wireless capability.

Arcam also demonstrated its forthcoming Blu-ray player at the show: it's said to be on the way in August, at a price thought to be in the region of £1000.