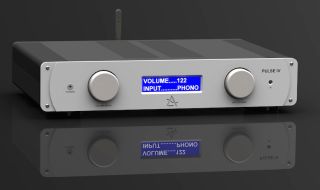 Leema Acoustics has announced it will be launching an updated version of its Pulse amplifier, the Pulse IV, at the Munich High End Show this month.

While the Pulse IV will only be in pre-production, we already know what features the finished product will have. Following on from the Pulse III, the latest version will keep up with the vinyl revival by having an MM/MC phono stage taken from Leema's £600 Essentials phono stage.

Leema has also made moves towards higher quality audio, with a 32-bit/384kHz DSD-capable DAC with a USB Type-B input, as well as aptX Bluetooth for wirelessly streaming through your smartphone or portable player. There are also a further six digital inputs: three optical and three electrical S/PDIF.

Alongside 80W of power, the Pulse IV also has a front mounted headphone amplifier for "late night or personal listening".

The Pulse IV comes in either in black or silver finishes and will be available in early autumn, priced £2,300.