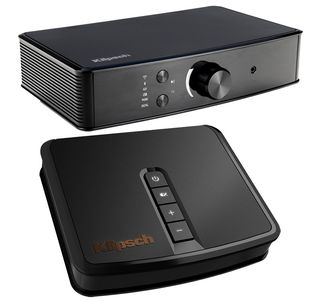 The new series of multi-room audio products will be known as Klipsch Stream, which Steve Jain, VP of Digital, Streaming and Portable Audio Solutions says will be a “game-changer” because it will “finally bring the legendary Klipsch sound to multi-room audio with DTS Play-Fi technology”. The entire Klipsch Stream system will be controlled via a free app for Android and iOS devices.

Klipsch Stream will initially comprise six products: the Gate, PowerGate, RW-1 wireless speaker, RSB-14 and RSB-8 soundbars and the Three Heritage Wireless system. UK pricing and availability for all the products in the system have yet to be announced.

The Gate and PowerGate act as hubs to distribute audio to other Stream products around the home. The Gate can stream internet radio stations, digital music libraries and audio from CDs and turntables thanks to a 3.5mm analogue audio input. The PowerGate meanwhile has a 2x100W Class D amplifier under the hood, meaning you can directly connect speakers.

There’s also a USB-B input which supports hi-res audio up to 24-bit/192kHz, so you can connect it to a computer to stream your digital music collection. An optical input is also included for connecting CD or Blu-ray players and there’s built-in support for Tidal and aptX Bluetooth for wireless streaming from mobile devices.

There’s more, too, as the PowerGate also features a selectable phono preamp/RCA line-level input and can stream music throughout the home to other Klipsch Stream products.

The RW-1 wireless speaker is relatively compact at 23cm high but Klipsch has managed to fit in a 0.75in horn-loaded aluminium tweeter and a 3.5in cerametallic woofer for “clear vocals and dynamic bass”. It’s powered by a 30W digital amplifier. Two RW-1 speakers can be paired together for stereo sound, which can be controlled via the Stream app, and a 3.5mm input lets you connect analogue sources.

The Three tabletop audio system (above) is part of Klipsch’s Heritage Wireless collection which uses “luxury materials” such as real wood veneers and copper switches and dials. Behind the grille you’ll find two 2.25in full range drivers and a 5.25in long-throw woofer.

For enhanced bass, the Three also comes with two 5.25in passive radiators, positioned on opposite sides to each other. The Three supports hi-res audio up to 24-bit/192kHz and has a range of inputs including Bluetooth, phono preamp, USB Type-B and 3.5mm analogue, as well as wi-fi for streaming over a network.

The RSB-8 can support 4K video thanks to its HDMI 2.0 input with HDCP 2.2 compatibility but there are optical digital and analogue inputs for connecting other devices. It comes with a wireless subwoofer with a 6.5in downward-firing driver. The RSB-14 (pictured) has similar specs but has three HDMI 2.0 inputs and comes with an 8in side-firing wireless subwoofer instead.