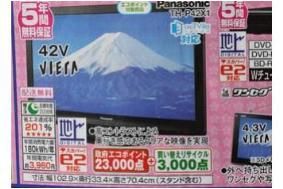 And the forthcoming Winter Olympics, in which Japanese competitors traditionally do well, and which attracts a fanatical following for events such as skating, could also be a factor in the sales boom.

Blu-ray disc recorders were also a major success in 2009, with large numbers of consumers making the switch from DVD recorders in order to take advantage of Japan's HD TV services: sales were up over 90% on 2008 levels, and almost 3m players and recorders were shipped in December.

However, the growth in TV sales isn't all good news for the beleaguered Japanese consumer electronics companies: like-for-like pricing on TVs was down 20% on 2008 tags.