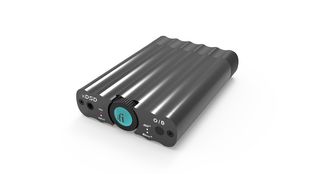 The iFi xDSD slots in above the nano iDSD Black Label in the company's range. It can play music over aptX Bluetooth or be wired to a laptop, tablet or smartphone via its USB type-A connection.

There’s a 3.5mm jack that doubles as a coaxial/optical input for connecting other devices, such as a TV, and a 3.5mm output on the front panel for headphones.

Playback from a single charge is a claimed 10 hours over coaxial/optical, eight hours via Bluetooth and six hours over USB – similar to rivals such as the Chord Mojo and Oppo HA-2 SE.

The iFi also supports PCM files up to 384kHz and DSD256 via its USB input. That can extend to 768kHz & DSD512 via a firmware update available on the company’s website. However, playback over coaxial/optical is limited to 24-bit/192kHz.

Like some of iFi’s DACs, the xDSD also supports MQA technology, which is handy for those who have access to Tidal Masters or MQA files from a hi-res music download store.

The xDSD uses the Burr-Brown DSD1793 DAC chip found in the company’s micro iDSD BL, but has a number of extra features.

Firstly, a 3D+ function provides two separate circuits: one optimised for headphones and the other for loudspeakers. The Cyberdrive headphone amplifier stage has a new circuit design aimed to drive a wide variety of headphones with different impedances.

Bass lovers can try the XBass+ function, too, which puts the emphasis on low-end performance.

Priced £399, the xDSD is entering Chord Mojo territory. Needless to say, we look forward to hearing how it fares.