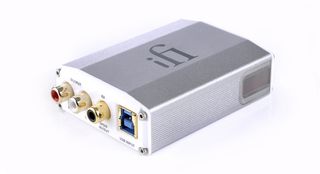 Products that qualify for the update include the brand's 'Stereo 50' music system and many of its DACs - the micro iDAC2, micro iDSD Black Label, nano iDSD LE and the nano iOne (pictured) that launched last year, as well as the discontinued nano iDSD and micro iDSD.

Before now, the 2017-launched nano iDSD Black Label was the only iFi product to support MQA.

For the unaware, MQA (Master Quality Authenticated) is an efficient method of digitally storing music as a file small and convenient enough to download or stream, without the sonic sacrifices traditionally associated with compressed files. MQA files are available to download from several hi-res download sites and to stream via Tidal.

MQA file playback will be indicated on iFi devices with a magenta LED light. Legacy products without the magenta LED option (such as the nano iDSD LE) will shine white/yellow instead.

From the 1st June, the nano iOne can be returned to iFi to be upgraded with the magenta LED.

The nano iDSD Black Label will now be sold with the firmware pre-installed, as will any forthcoming iFi device, such as the xDSD.

iFi Audio has Mojo in its sights with new £200 DAC