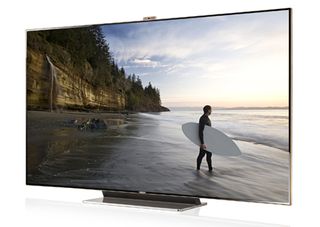 Samsung has today revealed its flagship 75in LED TV, the ES9000 model. It has a rose-gold coloured finish to reflect it premium status, and a built-in camera hidden within the top of the bezel.

Naturally it comes complete with the full suite of Samsung's smart TV features, such as Smart Interaction (voice and gesture control), Smart Content and Smart Evolution.

In addition, it's equipped with Sound Share, which wirelessly, and automatically, connects the TV's audio to Samsung's Series 6 and Series 7 wireless audio dock systems.

Also launched today here at IFA is the 65in version of the ES8000 series, with 2D and 3D capability.