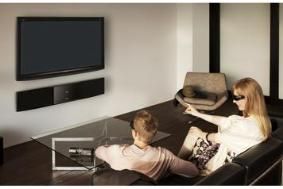 OK, we've managed to glean a bit more information from Panasonic. Here's some extra detail on all the new kit coming your way.

The Panasonic press launch has begun here at the IFA Show in Berlin, so we'll bring you the headlines as they happen, with a more detailed story and pictures to follow.

Highlights so far are:

• Panasonic claims it will be the No.1 green innovation company in the electronics industry by 2018. Expect a lot of similar environmental claims at IFA.

• Company is launching a 3D consumer camcorder. And there's a 3D conversion lens that fits on the end of a standard-size, Full HD camcorder, the Panasonic HDC-SDT750. Neat.

• Company drops big hints that it will bundle 3D Blu-ray of Avatar with its products around Christmas time. But no official announcement yet.

• Panasonic will offer 3D video-on-demand from next year, via Acetrax movies on VieraCast (ie: via a web connection).

• Eurosport 3D TV to be available as a consumer channel by the time of the French Open tennis tournament next spring.

• If you're at IFA this weekend, Panasonic will be showing a live feed of the US Open tennis in 3D at its stand, Friday-Sunday from 5pm.