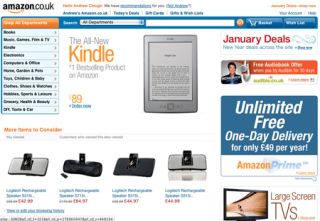 Amazon is running its Boxing Day Deals Week until January 1st with a series of lightning deals on selected electrical goods, Blu-rays and DVDs.

Also on Amazon are plenty of MP3 album downloads for less than £5, selected Kindle books from 99p and buy one/get one half price on some Kindle accessories.

Head on over to the Amazon website for these and many more deals.