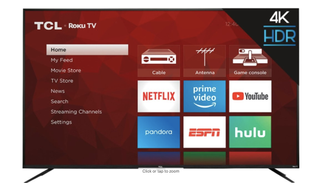 Sometimes, Cyber Monday prices make us feel like we've gone back a few decades to a time when cassette Walkmans and VHS recorders ruled the roost. But this is 2019, and the 75-inch TCL 4K UHD slashed in price at Best Buy boasts a bang up-to-date spec-sheet, including 4K UHD resolution, gloriously thin bezels and the popular Roku smart platform baked in – meaning you can stream from Disney Plus, Apple TV Plus, Netflix, Hulu, YouTube, Prime Video, or choose from more than 4,000 other streaming channels.

Download the free Roku app to your smartphone and you can transform this TCL into a voice-activated TV, too. Say something like "Siri, launch Netflix!" or "Siri, play Back to the Future on Amazon Prime Video" into your phone's mic and the TCL will oblige.

TCL 75" 4-series 4K UHD TV with Roku $600 at Best Buy
75 inches of 4K UHD resolution, the Roku platform inbuilt and two 10W main channel speakers for better sound to boot. We haven't tested this TCL model ourselves but, with a huge third slashed off the price, it's an awful lot of TV for little money. A superb Cyber Monday deal. View Deal

At this price, it's one of the best Cyber Monday deals on a large 4K smart TV we've seen. Oh and did we mention there's free delivery? That's right, you won't pay a cent to have it driven to your home. (Roads? Where we're going, we don't need roads...)

Save $10 on Disney+ with this Cyber Monday exclusive deal