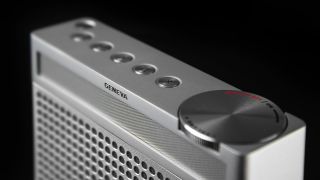 Geneva has announced its latest combination DAB+/FM radio and wireless speaker, the Touring S+, which is available now in four striking colour finishes.

Replacing the Touring S model, which was released last year, the S+ is a portable speaker capable of producing 100Db with battery life of up to 20 hours.

“We have invested a year in the design of the new electronics and acoustics of the Touring S+,” says the Swiss company’s Global Sales and Marketing VP, Sandro Fulgheri. “The drivers have been upgraded from one broadband driver to two full range drivers, and we have installed a more powerful class D amplifier and passive bass radiator in the back, all meticulously tuned by our sound engineers.”

The Touring S+’s power is belied by its diminutive stature, measuring only 17 x 10 x 4.5cm and weighing 0.8kg, while the radio tuner and Bluetooth 4.1 are joined by a 3.5mm aux connection for wired listening.

Geneva has previous in the wireless speaker category of our annual Awards, its Model S and AeroSphére offerings being mainstays before being discontinued, so fair to say we have high hopes for the Touring S+ when we get it in for testing in the near future.

Available in Black, White, Cognac and Red leather finishes, the Touring S+ is retailing at £200 from Geneva’s UK distributors.