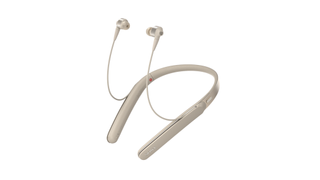 They're a wireless pair, but not 'true wireless'. In other words, they have a neckband design with a cable connecting the two earbuds. Though they connect wirelessly to your device, so you won't find yourself tethered to your phone.

Sony WI-1000XN headphones £132 at Argos
These neckband-style wireless headphones were brilliant at their original price so an absolute steal with this huge discount.View Deal

The neckband design splits opinion. Some love it, others hate it. It seems to have fallen out of favour in recent years due to the rise of true wireless earbuds.

But if you can get on with the divisive design, there's a lot to enjoy. The bass packs more punch than Anthony Joshua at a rematch, while the midrange is positively bursting with insight. The audio output is nicely balanced, and there's a range of noise-cancelling modes to suit all activities, whether you're running the streets and want to be able to hear oncoming traffic, or trying to get some shuteye on a plane.

Just about the only negative point we could find with them was that the neckband could use a bit more flexibility. But if you can put up with that, they'll reward you handsomely.

They're a couple of years old now, so doubtless will be outperformed by more modern pairs. Though that doesn't detract from their overall performance, particularly at this new price.

The sale is part of the clearance at Argos, so they probably won't stick around long. Better grab them while you can.