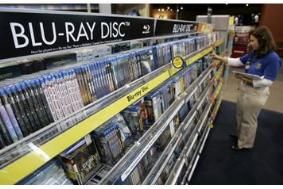 Sales of DVDs still dwarfed their HD sibling, with some 135 million DVD units at a value of 1.3 billion euros sold, a figure that's slightly down (-1.7 per cent) on last year.

In total, the value of the combined disc market increased by 2.3 per cent, while the increase in volume was 3.8 per cent.

“Blu-ray has continued to ride the wave of success at the start of 2010 and it is promising to see consumers respond well to the format,” said Yves Caillaud, Senior Vice President (EMEA) of Warner Home Video and Digital Distribution and Chairman of the DEGE.

“With the release of some of most popular films in cinematic history in the coming months, we expect to see Blu-ray sales continue to do well through the year... and we expect sales to increase as the penetration of HDTVs continues to accelerate.”