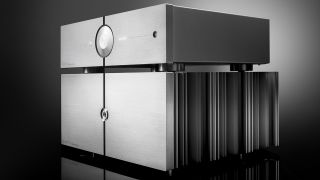 The new components follow in the footsteps of the Puccini Anniversary (£3000) and Maestro Anniversary (£6500) – and the Bellini preamp borrows from the Maestro's preamp stage. There are also upgrades to the power supply, the four-layer circuit board, component positioning and internal wiring. There's also a new volume control and remote. The Anniversary Bellini has 3 x RCA and 2 x XLR inputs, plus twin pairs of unbalanced and balanced outputs.

The Anniversary Donizetti power amp is a fully balanced design that delivers 250 watts into 8 ohms, the power doubling as impedance halves. A dual mono design, the Donizetti has two 1200VA transformers, and comes with a set of RCA and XLR inputs. It can also be operated in a mono design, should your system want serious amounts of power. We feel obliged to mention it weighs a staggeringly hefty 41.2kg.

If this all sounds a bit extreme, don't worry we thought the same thing – so naturally we've asked to review them as soon as possible...